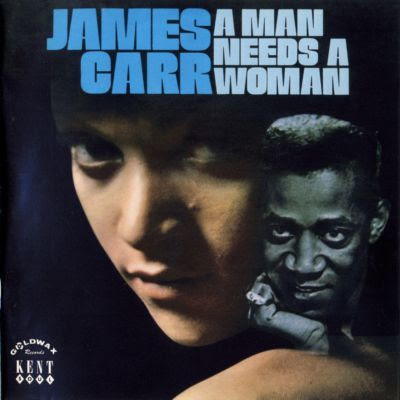 Sublime southern soul from one of the greats! James Carr is right up there with the best of the 60s,  Otis Redding, Arthur Conley, Joe Tex, and others but he never made it as big as them because of personal troubles and bad planning on the part of his label and management. Fortunately, his genius has been kept alive by record collectors everywhere  for whom this rare gem is a holy grail! The album features tunes that sum up the best of the south in the 60s  all sung by James with his unbelievably heartbreaking voice.

Much more obscure than his first album, ‘A Man Needs a Woman’, for my money, is every bit the equal of its predecessor. Not least, naturally, since it includes “The Dark End of the Street” and “You Got My Mind Messed Up” once more, two all-time legendary waxings that I’ll never tire off. But the LP’s original material isn’t far behind at all. “A Man Needs a Woman”, a sweet, country-soul tune written by O.B. McClinton, is another emotional tour de force that just spells out ‘DEEPER Soul’. “Stronger Than Love” picks up the pace considerably, a fine stomping groove featuring some nice high-pitched backing vocals, whereas the plaintive, minor keyed “More Love” is a thinly disguised ‘payback’ song aimed at Carr’s onetime girl. James is now expressing the virtues of his new lover, who’s got ‘more love in her little finger than [she] got in all of [her] heart.’ Ouch… The sentiment is continued on the more upbeat “You Didn’t Know It But You Had Me”, a fine beater, while Carr gets back in a lowdown pleading bag on the tender, slow “A Woman Is a Man’s Best Friend”, featuring that typical highly trebled Goldwax guitar and weeping horns.

The first side is completed with the frantic, sizzling “I’m a Fool for You”. A well-oiled, crunchy R&B-romp featuring soulful second vocals by Betty Harris - the track surely comes across as a full-fledged duet. The interaction between the two is electrifying, especially on the chorus. The flips opens on a decidedly moodier note, as Carr puts his spin on country singer Howard Harlan’s “Life Turned Her That Way”. Carr’s tormented soul is laid bare on top of an incessant, punishing groove, one smothered in purring Hammond organs and fits of brass, as he laments on the disposition of his woman. James’ rendition of Timmy Willis’ 1963 hit “Gonna Send You Back to Georgia” takes us right back to a run-down juke joint shakin’ it up somewhere down a dusty Mississippi road, and the very country-esque “I Sowed Love and Reaped a Heartache” could’ve stirred up just as much noise ‘at the other side of town’. A great, lazily rocking tune souled up by those fabulous pipes.

With the inclusion of “You Got My Mind Messed Up” and, especially, “The Dark End of the Street”, what you have is a perfect platter of brilliant Southern Soul.