Zefs Chasing Cara - Kneel and you will lose 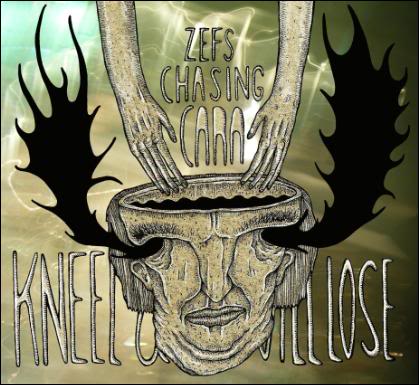 I’m maybe a wee bit late in highlighting this EP, as it was in fact released in February (before this blog even existed), but it’s one of my favourite listens of the year so it’s better late than never. Kneel And You Will Lose is the second EP by Zefs Chasing Cara, a solo project that is inventive and complex in its inception, but a quite accessible piece of work.

The mainstay of the music is extremely tech guitar playing, but the complexity is not allowed to overtake the songs and instead fuels and caters for the progressive, rousing pieces. The make-up of the tracks could be compared to house music, with the layering of sounds, building of momentum, and the general crescendo that is reached, and the structure allows for music that would soundtrack many a great cinematic moment.

There Are two Timelines And In One I Would Regret Not Doing This and Hurtsz Kerb introduce the guitar stylings, some synth sounds and the dance dynamics, before the lo-fi mellow Bru Hit Him splits the EP well and sets up an ending which blew me away.

It rises and drops several times, with the vocals having a calming effect in the middle, until it can’t be held back any more and the dam breaks allowing the wave of frenetic guitar to burst through. It is really inspiring stuff and has such an impetus about it.

The final track Cracker Deelosay starts off with similar guitar stylings and more prominent vocals than previous tracks that are slightly unclear but have a definite rallying presence to them. The song then bursts into what feels like a remix, with synth sounds and voice box taking over proceedings, giving it an almost house music feel. The step up tops off what feels like a massive forward movement from the start of the EP.

This EP and its predecessor, I’m Gowing, are both available for free download.