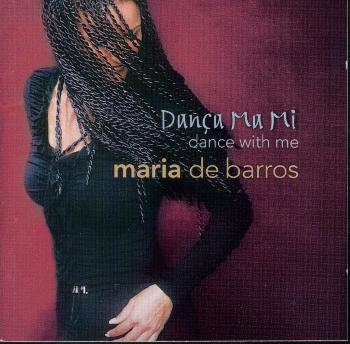 I was trying to find me some usefull information on this topic, but Ashanti Brothers Band's album 'Kill me and Fly' seemed ( how about this word ) ungoogleable. The leader of the band's called Osei Vasco, and that's really all I know. Being from 1978, I must say, the vinyl is in very good condition and spins beautiful. And then, the music, I have seldom heard such great highlife, I'm very fund of this sound with warm vocal harmony and hammond organ ! 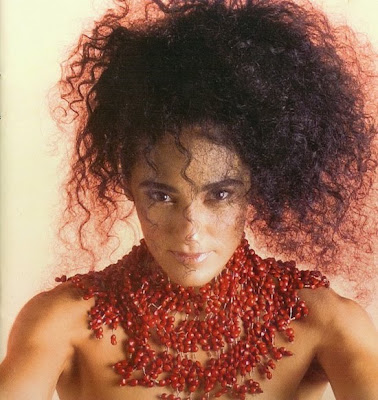 The exotic, one of a kind Brazilian guitarist, singer, and rhythmic mouth and body percussionist has had a stop-and-start career with turns as mysterious and intriguing as her music. After splashing on the scene with her Chesky debut Solo in 1994, continuing the stir (including vast critical acclaim) with Rhythms (1995) and releasing Chameleon on Verve in 1997, Badi Assad suffered from a series of personal issues that drew her back home for a few years. Fans who were excited about her 2003 re-emergence on the trio date Three Guitars with Larry Coryell and John Abercrombie will be beside themselves with the long-awaited Verde, her first solo project in six years. Those expecting a typical Brazilian vocal album -- she explains the title as "the shades of the Brazilian rain forest" -- will be surprised by Assad's versatility, which incorporates rhythmic textures from around the world. She opens with the very African-flavored voice and dense percussion call-and-response "Cheguei Meu Povo" and a vocal percussion pitter patter interlude before tapping into a sound more typical of classic romantic samba ("Basica"). That sultry side is balanced by her more aggressive vocal and guitar on the feisty "Nao Adianta," which blends modern rock influences with indigenous soundscaping, complete with birdcalls. Other tracks have slight classical leaning, and there's even a little avant-garde oddity apparent on the brief "Feminina." More mainstream ears will be glued to her sly, sexy reading of U2's "One" and soaring, folk- and chamber music-tinged take on Björk's dramatic "Bachelorette," which further confirms Assad's incredible willingness to tackle exotic challenges. Though all the stylistic zigzagging is fascinating, Assad is first and foremost a vocalist of heartbreaking intensity, and tracks like the mournful "Bom Dia Tristeza" best reflect her ability to penetrate the heart. V.A - Festival in the desert The record label press about the CD:

Imagine a musical celebration so remote it can only be reached by camelback or 4x4. Add to the picture days fi lled with camel racing,impromptu jam sessions under traditional leather tents -and a modern stage full of electric guitars. You start to get a picture of what it must be like to attend the annual Festival in the Desert which takes place in the heart of the Sahara desert.The festival was started to provide a worldwide showcase for the music and culture of the Tuareg people in particular and of Mali and West Africa in general.Its goal is to stimulate global interest in the southern Sahara region -its people,culture,history, economic and social development.This year ’s festival,which featured 30 acts from Africa,Europe and North America,was hailed by the San Francisco Chronicle as “the only event on Earth where top-name Western musicians (like Robert Plant of Led Zeppelin) perform on the same stage as nomadic groups with guitars, where Muslim government leaders and devout adherents of Islam sit in the same audience as jeans-wearing men with tattoos, and where camels and donkeys are as common a sight as people.”

More press:
Imagine a community celebration so remote it could only be reached by camelback or 4x4. Add to the picture a day filled with camel racing, impromptu jam sessions under camel-skin tents, and a stage full of electric guitars. You are starting to get a picture of what it must have been like to attend Le Festival au Désert or The Festival in the Desert in the Sahara in January 2003.

Highlights from the 2003 Festival can be heard on Festival in the Desert (World Village / harmonia mundi), a CD to be released on October 14, 2003 . The recordings were made on a 24-track recorder during this remote festival, which featured 30 acts from North Africa, Europe, and North America. American media hailed the 2003 Festival as “one of the most surreal ever staged” (Boston Phoenix) and “the most thrilling music festival experience of my life” (Afropop Worldwide). World Village expects to release a Festival in the Desert DVD in early 2004.

It may not have meant as much to the local Tamashek people that Led Zeppelin singer Robert Plant performed at the event, with a schedule filled by legends of Saharan and Malian music. The CD captures Tidawt, who made the 1000-kilometer journey from their home in Niger to perform. And Sedoum Ehl Aïda—Mauritania’s pioneer of electric guitar—who arrived with his full band, having only heard about the Festival 20 days prior and knowing there was no room on the bill, nor money for his show. Mali’s global ambassadors Ali Farka Touré and Oumou Sangare were expectedly well received. But Plant’s live rendition of “Win My Train Fare Home”—also on the CD and backed by guitarists Justin Adams and Skin and members of Lo’Jo—will certainly go down in rock history.

The CD’s simultaneous diversity and seamlessness—with the high quality of footage from such a remote site—stand out. Charlie Gillett of BBC Radio has already called it “The best live album I’ve ever heard.” From Takamba Super Onze’s earthshaking opening traditional rhythm based on the gait of a camel, to the unlikely collaboration between Tamashek guitarist Foy-Foy and French rapper Kwal, the impossible combination of artists could have existed at no other place or time.

The Festival’s significance grows in light of the history of this region where civil war prevailed only a decade ago. The celebration manifests what was envisioned in the 1996 “Flame of Peace,” in which 3000 guns were publicly burned to signify the beginning of the reconciliation between the nomadic and sedentary communities of the southern Sahara. EFES, a Tamashek association whose aim is to develop the region, hit on the idea of grafting the Festival onto the great traditional gatherings of the Tamashek people on a grand scale. For centuries these gatherings have provided an invaluable opportunity for the nomadic Tamasheks to meet and celebrate with various forms of Tamashek song, dance, poetry, ritual sword fighting, games, and other ancient cultural traditions. EFES opened the event to the entire desert region, to the whole of Mali, and eventually to the world.

U.K. music critic Andy Morgan writes in his comprehensive, awe-inspiring liner notes, “Bambara and Manding musicians... to whom Timbuktu and the Sahara were feared no-go regions… suddenly found themselves walking amongst ferocious looking Tamashek nomads without trepidation or concern. Oumou Sangare’s rendition of the Malian national anthem was so much more than an inconsequential piece of enforced protocol. It was a heartfelt hymn to the peace and prosperity of an African nation, united, in music and feasting… Ali Farka Touré just beamed a forty-eight hour smile and kept repeating over and over, ‘Je suis très content, très fier!’ (‘I’m very happy, very proud!’).” 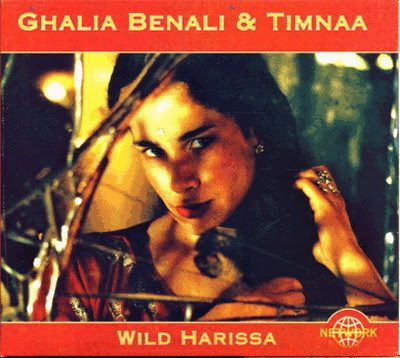 Ghalia Benali from Tunisia is one of the musical surprises to emerge from the Arab world at the turn of the millennium. A successful actress, she played a leading role in the film "La saison des hommes". Her highly acclaimed concerts in Tunis, Paris and Brussels had the record companies queuing to sign her up, but she preferred to wait until she had found her dream line-up. And now she has - Timnaa is an international ensemble whose virtuoso fiddles, flamenco guitars and Arab percussion carry her expressively smoky and profoundly emotional voice from Tunisia to Andalusia and back again, via the Balkans and Brazil. Ghalia herself describes her new project as "Arab music in new forms, sometimes festive but never profane, occasionally ro-mantic and elegiac, or even classical and medieval, and sometimes wild and over the top - a passport to many cultures, a microcosm that merges the centuries into some-thing new".
permalink

Dhammapada is a John Mayer work that was commissioned by EMI in 1976 but remained unreleased for 30 years. His work with Joe Harriott on Indo-Jazz Suite and Indo-Jazz Fusions is justifiably lauded, but Dhammapada expands on his East-West fusion by adding instrumentation not just from India (sitar, sarod, tabla) but also from Japan and China (koto and cheng, respectively) to his British jazz combo (sax/clarinet, trumpet, flute, piano, bass). In addition to drums and tabla, he utilizes a trio of percussionists who play everything from glockenspiel to marimba to temple bells. He also makes use of Japanese and Chinese scales in addition to his Indian classical influences. The results are amazing. The seemingly odd instrumentation works surprisingly well together as an ensemble, and Mayer's enormous talents as both composer and arranger really come to the fore. The longer pieces play like suites within a suite, with thoroughly composed sections seamlessly giving way to jazzy improvisational solos and musical conversations (for example, the trumpet/sitar dialogue on "Maha-Samana") before the introduction of new themes. Mayer's use of polyrhythms and counterpoint is fantastic and the band's ability to transition from chamber ensemble precision to jazz-rock vamping is incredible. There are no lengthy solos to speak of; the playing is concise and extremely focused but everyone gets a turn. The longer pieces are separated from each other by progressively more elaborate arrangements of the same theme inspired by "Rag Kafi," "Sannyasin." Starting with just glockenspiel and crotales (basically bells), sax is added, then galloping bass and percussion. These pieces keep the album tied together nicely thematically, and also highlight Mayer's arranging skills. The recording itself is also excellent -- crisp and clear, taking full advantage of the stereo spectrum so each instrument is clearly identifiable with no muddiness in the mix (no easy task with a 13-piece ensemble). That this album sat unreleased for 30 years is almost a crime. It's a brilliant, groundbreaking work that sounds fresh even after languishing for three decades. It's a shame that Mayer didn't live to see the eventual release of Dhammapada. It could well be his finest achievement.
~ Sean Westergaard
permalink
Partager cet article

The Dark City Sisters were a group of session singers who came together to record an album and in the process popularized an innovative new style of singing. Rather than singing a common four-part harmony, the Sisters used five parts, which created a richer tone. Sometimes known as "vocal jive," this technique was subsumed under the umbrella term "mbaqanga," meaning, literally, dumpling, and figuratively, a homegrown style.
~ Leon Jackson
permalink
Partager cet article