The Palermo Surf Experience play with extreme volume and energy, while not racing along. The upside are 12 mostly very good songs delivered with excellent guitar and drums. the downside is inconsistent mixing, lead guitar often too low in the mix, and drums often to prominent. While this serves the intensity, it subdues the melodies and sense of ensemble that's clearly in the performance. My guess is that this is an excellent band that would wear you out live, and one that will deliver killer recordings once the formula is found. I really like this disc, aside from the production values. Phil Dirt

The Make Up - In Mass Mind 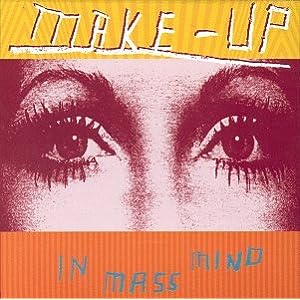 For 1998's In Mass Mind, their second studio album and fourth long-player overall, the Make-Up recruited Adam & Eve -- a.k.a. Royal Trux's Neil Hagerty and Jennifer Herrema -- for production duties. As evidenced by the album's warm, detailed sound, the collaboration is a perfect fit, bringing just enough polish and focus to the Make-Up's music to make it even more powerful. "Black Wire Pt. 1," "Drop the Needle," and "The Joy of Sound" show off the group's dynamic, theatrical side, while "Earth Worm," "Do You Like Gospel Music," "Time Machine," and "Caught Up in the Rapture" are atmospheric and soulful, further explorations into the band's widening sonic territory. 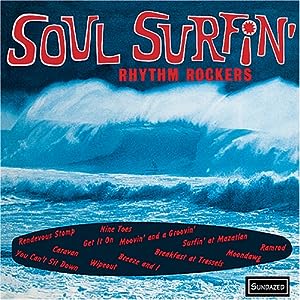 Quite possibly the greatest surf album you've never heard, this 1963 release from the Rhythm Rockers is a classic. Pounding surf-rock from the days when surf was surf and rock was something entirely other than some white-pupiled, devil-worshiping geek in a black corset. Turn it up! Reject Satan! Save your soul and lose your lease!
permalink

I have issues with women in rock. Not so much the actual act of female human beings playing that rock n' roll music, but the entire media concept of in-quotes "women in rock." I'm tired of Rolling Stone double issues, the VH1 theme weeks, the Tower Records special displays. Condescending, patronizing bullshit, all of it. Now, I won't get into the issue of the built-in misogyny in the rock criticism phrasebook; partially because I wouldn't want to endorse a paranoid shift towards excessively vigilant political correctness, and partially because I myself am guilty of occasionally over-using the adjective 'sultry.'

No, at hand is a bigger fish-- namely, that far too much writing about female musicians gets caught up with the idea that the artist must be saying something about the 'female experience.' Rather than accept these acts as just plain musicians, being a woman playing rock music is automatically assumed to be a declaration of activist intentions. Other than the obvious double-standard (when was the last time you read a review about an all-guy band's songs reflecting the male experience?), this allows the Y chromosome-dominated rock press to focus on gender while still coming off as enlightened. But what of those girl bands that just want to rock, without all that role model jazz?

Consider, for example, indie-rock darlings Sleater-Kinney, just coincidentally the subject of this review! To date, Sleater-Kinney has, in my professional opinion, been a good but not great band with a solid back catalog of energetic but slightly homogenous releases. To the majority of my esteemed colleagues, however, S-K is the three-headed coming of the woman Christ, The Great Female Hope, the band that proves at long last that, hey, girls can rawk too! Never mind the fact that girls are, after all, evolutionarily engineered to have fingers for making chord shapes and strumming, just like boys.

Saddled with such a heavy label, and with unrealistic and undeserved expectations, the three women of Sleater-Kinney could just keep on making the same album over and over again, pleasing their tiny, rabid loyalists and the leather-patched elbow crowd in the press box. Hey, the life ain't too bad for a cult band these days. But, thank god, the Kill Rock Stars trio isn't content to forever meander in that habitat. With One Beat, Sleater-Kinney have turned in an album that absolutely, positively OBLITERATES the gender card, an album so colossal that all prefixes to the label 'rock band' must be immediately discarded.

From the opening, off-kilter drum pattern of the title track, One Beat takes you on a log flume ride through a forest of monumental riffs-- a log flume ride, people! Witness the fretboard slides of "Hollywood Ending", the cocky strut of "Step Aside", the mighty, fist-pumping second half of "Combat Rock" (to which I'd like to just give a premature Forkie for Best Riff of the Year right now). Also, be forewarned that the drumstick-twirling coda of "Far Away" has been shown to provoke sudden miming of snare hits and windmill strums in laboratory animals.

Now, you might be hearing a lot of crazytalk from longtime S-K supporters that the new album is their most disappointing to date. Ignore it; fanbase discomfort is a common symptom of the breakthrough album, proving that the act has tweaked their formula far enough to piss off the vets who want their pet band to stay predictable. Kinney's definitely changed up the recipe (as they had already begun to do with All Hands on the Bad One), but all changes are positive, foremost being a new understanding of how restraint and scaling back can allow for exponentially increased rockage. "Combat Rock" and "The Remainder" stutter along a single riff, teasingly refusing to explode before building to a tantric peak. "Light Rail Coyote" and "O2" both come out with all engines blazing, but retreat to valleys of uncharacteristically subdued hush.

Also helping the cause is an increased singing role for Carrie Brownstein, who sounds more confident than ever sporting a fully developed hiccupy vocal character that plays off Tucker's wail like lime flavoring on Tostitos. For anyone of the opinion that Tucker's banshee act occasionally got out of hand on older S-K material, Brownstein's participation is welcome news for your fragile eardrums. The latest model of the Janet Weiss percussion-cyborg sings a bit, too, but her main contribution is her incredibly melodic drums, strident and full-bodied as ever.

Meanwhile, the band breaks out the required fifth-album accoutrements: horn section, strings, occasional keyboards. It might be predictable timing for the band to expand their sound, but it's handled delicately by producer John Goodmanson, who never allows the spice to overwhelm the dish (er, sonically speaking, of course). The slip-and-slide Moog on "Oh!" drives home the song's oh-woah-woah playfulness, "Step Aside"'s marching band brass lends its revolution beckoning an epic quality, and Sam Coomes' theremin on "Funeral Song" fulfills the FDA requirements for any tune that mentions haunted houses, demons, and Halloween.

So except for a closing track ("Sympathy") where the bluesy over-emoting reminds me of everything I used to dislike about the Sleater, One Beat is an uncompromising, energetic monster of a record. Most of all, it's just accessible (pardon my French) enough to be exactly what the rock world needs these days: the Trail of Dead for those put off by the Danzig-esque lyrics and relentless drum-rolling. It's a dive-headfirst-into-an-empty-pool, take-the-subway-to-Queens, snap-into-a-Slim-Jim, forget-to-bring-back the-library-books, tire-pressure-dangerously-low, sneaking-fireworks-across-the-Illinois-Indiana-border kind of album. That it's performed by three persons of the female gender is entirely beside the point, to anyone who's really listening.

So, like, what the fuck? Four guys--known only as Secret Asian Man, Dymaxion Lee, Brain Conflict, and Mr. Nein, represented on their inside cover by four kabuki masks--decide that they want to get in on genre-bending, and somehow decide that the niche they want to carve will simultaneously involve spy guitars, surf rock, and prog (wtf). The result is the soundtrack-on-speed that was never made for Pulp Ficton, and I couldn’t tell you to exactly what power, but this is pretty fucking up there on the “novelty” meter. So novel is Daikaiju, in fact, that it may distract you from the fact that there’s actually some decent music under all the mystical nonsense and Godzilla-throwback inside cover art. They may have silly alter-ego names (and seriously, who hasn’t given himself the “Secret Asian Man” alter-ego?), but these four characters have no shortage of technical strength to apply to their surprisingly succinct jams. This is spy-surf-prog, but it’s still relatively tight. Each mini-suite is decked out with at least two or three hooks, complex guitar parts, nearly math-rock levels of percussive complexity, and some solid bass leads. Occasionally, the congealing of those positive aspects results in a keeper; “The Trouble With Those Mothra Girls” welds together all of the above with a keen sense of dynamism. It’s pure driving background bliss, with a serious romantic ventricle in its melodic guitar heart, progressing quickly and efficiently through increasingly layered and precarious passages, until a wonderfully executed guitar solo slaps on the song’s exclamation point. Pointing out the technically proficient elements in the other tracks here would be a waste of words, because frankly, technical proficiency is the last thing that Daikaiju lack. You won’t get tired of these guys because they’re not skilled enough. But I suspect that you will tire of them, eventually (once you’ve played it for your fellow music-loving friends), because Daikaiju is an album more concerned with showmanship and atmosphere than purpose. “Son of Daikaiju” roils about in impressive guitar work, and the clean atmospheric movements of “Incognito” are plenty remarkable, but have no thematic dynamism to them. Fundamentally, most of these songs are highly predictable in tone and pace (Pulp Fiction tone, quick pace), and leave little to the anticipation. Within the first few bars of each song, the band’s path is relatively clear, their tempo reliable, and their ideas almost transparent. Besides “Mothra Girls,” the only track here to break the mold is the sterling Santana-caliber “Farewell to Monster Island,” with its beautiful, aching swoons and uses of space. If you’re a CMG reader who thinks I’m too obsessed with technical evaluation in my general evaluative philosophy, I would of course say I’m not; I merely believe that technical nuance contributes to nuance in purpose, and thereby makes figuring out a band’s purpose out more rewarding. In Daikaiju’s case, instrumental nuance is there merely for showing off, rather than really creating any greater purpose. In this aspect they suffer (slightly less) from the problem that (terminally) plagues The Mars Volta: there’s no meaning, no idea to be gleaned from their music aside from its interesting concept. Which doesn’t take away from the fact that their musical concept is highly unique--but without the movie to play the music to, the experience of this music is somewhat hollow. I see two possible remedies: either enhance the quality of the musical dynamism, or find Quentin Tarantino and make him listen to Daikaiju stat. Otherwise, the group’s sizeable talents may amount to precious (and I do mean precious) little.
permalink

Hawaii Samurai - Let there be surf