British soul singer James Hunter has assembled the James Hunter Six for his first album in five years, Minute by Minute, produced by Daptone Records co-founder Gabriel Roth. With a collaboration like that you can expect plenty of old school R&B cuts like this title track, a brassy, lovelorn number that Hunter injects with a bit of optimism singing, "There's no need to check my watch / Cause time is all I got / till I get to you!" "Working with Gabe Roth was a revelation," said Hunter. "Not only does he have an excellent ear for what works and what doesn't, and almost limitless patience (which is almost as much as is required when recording us) he is also possibly the most sarcastic person we have ever worked with (a big plus) which puts the rest of us in first to sixth place. It was like working with Groucho Marx. He even looks a bit like him." Source By Kitty Empire  from http://www.guardian.co.uk

Home Again, the debut album by Michael Kiwanuka, is a curious debut for the winner of the BBC Sound of 2012 poll. It may be available as a download but it desperately wants to be a 33rpm vinyl record with a faded sleeve that first entered the second-hand record market around 1973, rather than a 21st-century artefact.

It begins gorgeously, with little flurries of flute on the minor-key "Tell Me a Tale". The producer is Paul Butler, whose day band, the Bees, specialise in this sort of expertly turned period shading. Throughout, Butler is revealed as a key factor in making Kiwanuka something greater than just the next soul man on the UK's retro-pop conveyor belt, something akin to a hipper James Morrison. Unfortunately, the early promise of this lush, jazzy slice of yearning isn't quite kept by the rest of the album.

Raised in north London by Ugandan parents, the young Kiwanuka tussled with his identity as a guitar-loving black kid. Until, that is, he discovered first Jimi Hendrix and then Otis Redding and eventually found his spiritual home: a vintage Venn overlap in which soul artists, folkies and the late 60s, early 70s singer-songwriters conjoin harmoniously. Embraced by Communion Records, home of the Mumfords, Kiwanuka was able to quit his session-musician day job (reluctantly abetting pop-grime hotshots such as Labrinth and Chipmunk) and strum more meaningfully. He is now signed to Polydor.

Having spent so long as a fish out of water, Kiwanuka knows a thing or two about longing ("I'm Getting Ready," avers one song) and about the pleasures of finally coming home. The title track starts out like prime Later With Jools Holland fodder, the sort of "quality" nodding, strumming guff that has afflicted the nation since David Gray. Then something unexpected happens: Butler double-tracks Kiwanuka's vocal, adds a shuffling drum beat and suddenly we're in Bon Iver territory – hazy and magical.

It doesn't last. Charm exudes from songs such as "Bones", with its brushed drums, doo-wop call and response, and churchy expressions of love. But there are not quite enough of these moments on Home Again, a record that settles into a nicely crafted, twinkly retro rut without really grabbing you by anything more vital than your lapels; tweedy, bespoke, second-hand. "I Won't Lie" has all the trappings of a thoughtful gem in the vein of Marvin Gaye. But trappings are all they are – Butler's rumbling drums and ebb-and-flow arrangement expose Kiwanuka's contribution: his voice never catches, his vulnerability is never underscored; he merely sings his words nicely.

Like his co-star of 2012, the Brits-anointed Emeli Sandé, Kiwanuka is undoubtedly gifted and, like her, seems preternaturally middle-aged, an old soul in a 25-year-old body whose need to appear mature at all costs is troubling. Home Again is in no way an unpleasant record, but its unity of sound, tempo, era and purpose is less Aristotelian than it is just a little ho-hum. Unlike the work of Kiwanuka's forebears – Bill Withers, Terry Callier et al – you don't come away from Home Again changed by its insights. Instead, you have just filled the air with some nice sounds.

It’s hardly coincidence that Man in Motion, the latest project from Warren Haynes, is also a spot-on way to describe the album’s creator. After touring and recording extensively with The Allman Brothers, Gov’t Mule, and The Dead, is it surprising that Warren found time to cut a solo album? Surprising – no, not to those that follow Warren. Anticipated and appreciated? Yes, you’d better believe it.

In his first solo studio recording in 18 years, it is a wonderful treat to listen to Warren pour it out in this soulful, personal piece of work. Warren’s guitar is present as always, but the power of Man in Motion lies in the passionate, penetrating vocals that provide a glimpse into the soul of the singer himself. Add to that the arsenal of keys, sax, and backing vocals from world-class talent, and out comes Man in Motion, a soul-driven blend of the modernity and roots that make Warren shine.

Man in Motion kicks off with the title track and single, “Man in Motion.” From there, Warren displays his adventurous, diverse style in cuts like “River’s Gonna Rise” and “Sick of My Shadow,” songs with a ton of groove and force. His inspiring vocals drive songs like “Everyday Will Be Like A Holiday” (originally by William Bell), “Your Wildest Dreams,” and “Save Me.” This ten-song album, from start to finish, is charged with inspiration. It is a piece of work that should be appreciated and enjoyed plentifully. By Amanda Petrusich from http://pitchfork.com


In September 1959, Fred McDowell-- an overalls-wearing, stoop-shouldered, Panola County cotton farmer-- picked up an old acoustic guitar and wandered over to his neighbor Lonnie Young's house. Word had spread that the folklorist Alan Lomax (traveling with the English singer Shirley Collins and a 26-pound, two-track reel-to-reel tape machine) was hunting local artists to record for Atlantic Records. McDowell, who was born around 1904 in Rossville, Tennessee, had grown up imitating the still-nascent sound of the Delta blues, using an old pocketknife (and then a whittled-down bovine rib bone, and finally the squat neck of a Gibson's gin bottle) as a rudimentary slide. By the time McDowell, then 55, cornered Lomax on Young's porch, his scope (and his skill) had broadened, and the sound he made-- a mesmerizing, groove-based blues that both nodded to and defied his Delta predecessors-- instantly captivated Lomax, and eventually the world.

Fred McDowell: The Alan Lomax Recordings (available as a download through Global Jukebox, the Alan Lomax Archive's digital imprint, and on LP via Mississippi Records) opens with Bukka White's "Shake 'Em on Down", a song that McDowell appears to enjoy playing more than he enjoys breathing or eating or maybe doing anything else at all.  Following Lomax's prompt-- "1, 2, 3, go," he commands in his high, nasal voice-- McDowell locks into a heavy, propulsive groove, while his sister, Fanny Davis, blows into a homemade kazoo that Lomax, in The Land Where the Blues Began, described as "a fine-toothed comb wrapped in toilet paper" (it sure is loud). "Shake 'Em on Down" is a bracing introduction to the cadence of North Mississippi Hill Country blues: McDowell's guitar is disorienting and relentless, so rhythmic and mind-bending that if you were to, say, listen to it while driving down a dark road in the rain, you'd likely veer off into a ditch (and then feel relieved). Davis' kazooing-- itself vaguely lawless-- provides a welcome counterpoint (it's like staring at a fixed point on the horizon while trying not to vomit over the side of a boat), while Miles Pratcher (of the excellent local square dance band the Pratcher Brothers) assaults a second guitar. The result is mystifying and spectacular.

McDowell's rendition of "Good Morning Little Schoolgirl" (a deeply fucked-up-- if not particularly uncommon-- ode to little girls, made famous, first, by Sonny Boy Williamson, and then again by the Grateful Dead) is more of a showcase for his nimble guitar work than any rogue sexual proclivities. McDowell's muted delivery of the lyrics ("Good mornin' 'lil school girl/ Can I go home, can I go home with you?/ Tell your mama and your papa/ Lord, I'm a little school boy, too") is merciful; he's politely disinterested, if not fully disengaged. McDowell reserves his howls of longing for slightly less uncouth fare, like "Worried Mind Blues", an unrequited love song he imbues with legitimate anguish ("You make me weak and you make me moan," he groans, sounding broken). Mostly, though, the rhythm is the thing: With his twangy, piercing strums, McDowell establishes himself as a singular player, infinitely more interested in the transcendental than the germane. Somehow, he manages to make the acoustic guitar-- that purveyor of sweet lullabies!-- sound menacing, not familiar.

After McDowell was featured on one of Lomax's Sounds of the South compilations, he enjoyed considerable acclaim outside of north Mississippi (the timing was right with the folk revival of the 1960s gathering steam) and more than a dozen solo LPs, although none approaches the looseness of his first session for Lomax. In 1971, the Rolling Stones covered McDowell's "You Got to Move" for Sticky Fingers; it's a sluggish and deliberate rendition, and Jagger's approximation of McDowell's worn, scratchy voice feels both flat and affected. A year later, McDowell died of stomach cancer; his body, swaddled in a silver lamé suit (a gift from the Stones), is buried at the Hammond Hill Baptist Church, near Como, Miss. Supposedly, Bonnie Raitt-- a guitar student of McDowell's-- paid for a new headstone after the original misspelled his name.

It's awfully easy to approach archival releases-- and field recordings, especially-- with a detached reverence, at least in part because they were rendered spontaneously on front porches and in backyards, miles from the formal, self-conscious fussing of the recording studio. Consequently, any and all fidelity issues tend to be heard as sepia-toned, "atmospheric" snafus (oh, crickets!); judgment is clouded by access, and we feel lucky-- embarrassed, even-- to be privy to these odd little moments at all. Accordingly, what's most remarkable about The Alan Lomax Recordings is its spectacular re-mastering job (per the Portland-based engineer Timothy Stollenwerk); now, it's possible to divorce these songs from their contexts long enough to be properly flabbergasted by McDowell's hypnotic, eager performance (although, should you get curious, the collection is also beautifully annotated by Arhoolie Records' Adam Machado and the Lomax Archive's Nathan Salsburg). None of these tracks was previously unreleased (all have appeared, in one form or another, on various compilations, many long out of print), but The Alan Lomax Recordings still feels revelatory-- and for his part, McDowell still sounds spectacularly alive. 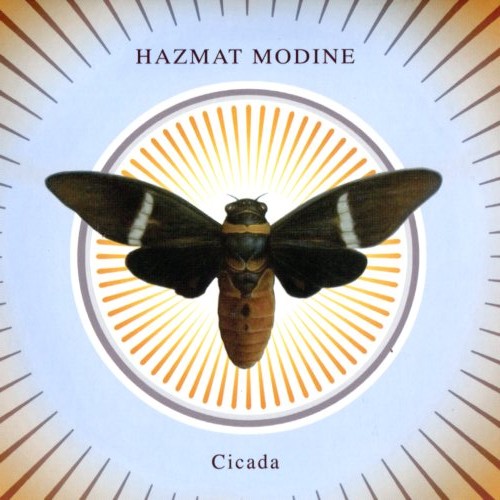 By Robin Denselow  from http://www.guardian.co.uk

Hazmat Modine are a maverick New York band who are shifting from Americana to global influences with remarkable results. Founded by singer-songwriter, guitarist and impressive harmonica-player Wade Shuman, they are distinctive both because of their range and their line-up: two harmonicas are matched against a three-piece brass section, guitar, steel guitar and percussion. The songs here are often blues-based, but always different; the opening Mocking Bird starts like a slow work-song and builds into rousing, harmonica and brass-backed folk-blues, while Two Forty Seven is a finger-clicking burst of brassy R&B, and the title track is an exercise in poetry and blues. The cover songs are equally original, and include a cheerful, spoken treatment of Irving Berlin's Walking Stick and the harmonica-backed 70s soul of I've Been Lonely for So Long. But the collaborations are even better, with Kronos Quartet adding their strings to the cheerfully rhythmic blues Dead Crow and Benin's Gangbé Brass Band bringing African jazz influences to Cotonou Stomp and the slinky Child of a Blind Man, where Natalie Merchant provides lead vocals. A brave and unexpected record.