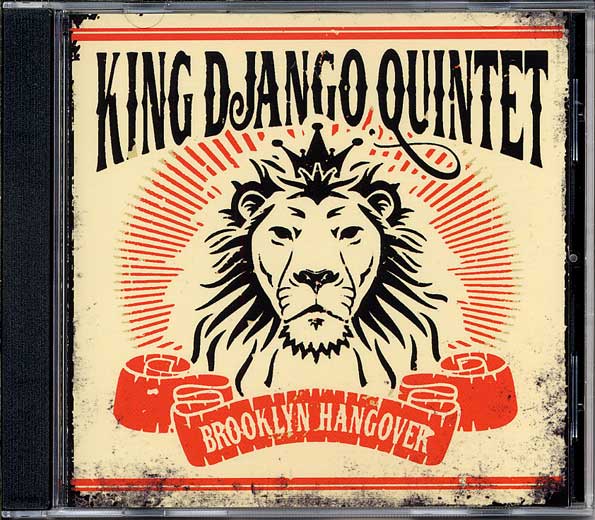 By less! Talk about intimate! It's the closest you can get to having a King Django Quintet concert in your living room! The sound quality on this release is so excellent that many listeners continue to ask if this is really a live recording.

For die-hard fans this is a rare and tasty treat full of ska, rocksteady, reggae and dancehall nuggets, while for those unfamiliar with the King it serves as a great introduction. Django was one of the pioneers of the New York Ska scene way back in the 1980’s. Since that time, as bandleader, singer, songwriter, arranger and trombonist of Skinnerbox and The Stubborn All-Stars, through sideman stints touring and recording with the likes of Murphy’s Law, Rancid, The Slackers and The Toasters, touring with his own groups and countless pickup bands, hosting the monthly Version City party in NYC, and as a very in-demand producer/engineer working out of his own Version City Studio, he has continually built on his reputation as one of the most influential and driving forces of Jamaican-inspired music in America and throughout the world. 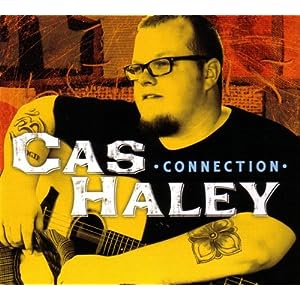 "Connection... starts with three consecutive fantastically catchy tunes: 'Release Me (The Fear),' 'Better' and 'Take A Chance' and continues the good vibes throughout, showcasing Haley’s pure joy in singing and performing…Haley’s music is a happy, Caribbean-sounding reggae that evokes joy and positivity. His voice... is flawless in its movement within the ranges and gives the listener chills when he harmonizes with himself… [Cas] is an infectious, likable entertainer with a bright smile and personality, who obviously enjoys what he does - and it rubs off on the audience." - LA Daily News

"Connection sounds organic rather than slick, and Haley comes across as someone who is seriously immersed in reggae; not someone who has only a casual interest in reggae and decided to throw in some reggae beats here and there." - All Music Guide

"Cas has got a winning voice and tune sense." - Philadelphia Daily News

Sebastian Sturm - Get Up and Get Going

For the past few years, Winston McAnuff (aka Electric Dread) and his son Matthew have been spreading the old school reggae roots gospel around the world.
Far from aggressive raga, McAnuff father & son add their contemporary touch to the music, producing a sound that's every so funky with a strong rock touch. Get ready to be carried away... to Ziooooooonnnnnnnn!

Lady Passion - Rain On Me 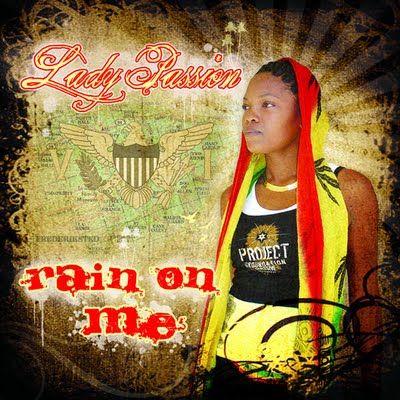 Virgin Islands roots singer Lady Passion, a powerful songstress from St. Croix, first came to our attention when we were listening to the 2002 released Bambu Station compilation set "Talking Roots II" that featured her hit song "Never Change My Mind", which is also included on this "Rain On Me" set. Later on we heard her on Project Groundation's mixtapes and on the one riddim cd's "Show Love", "Rastar", "Face" and "Specialist". In 2007 appeared a 9-track Lady Passion EP with tunes like the aforementioned "Never Change My Mind", "Sunshine Through Rain" -- also included on this album -- and the excellent combination tune with Ras Attitude entitled "Royal To Me".

Produced by DJ Child of Project Groundation Massive, Lustre Kings Productions, I Grade, Zion High Productions, Bambu Station, Sound V.I. and Itation Records, Lady Passion's full length debut album is a very satisfying collection of tunes. The album kicks off with "Passions Intro", an intro we remember from previous releases, and then the listener is treated to the marvelous "Accra, Ghana". It doesn't happen that often, but the sheer beauty of this amazing, mystical tune made that we gave it several spins before we skipped to the next track. "No Place Like Home", thematically similar to "Accra, Ghana", is a wicked modern roots tune underpinned by a truly great "live" played riddim. Next comes the even stronger "Teach The Children", an extraordinary song with wonderful vibes and an awesome bassline. All in all a great way to start an album!!

But it surely doesn't end here as there are more beautifully written songs over appealing strong riddims throughout the remaining part of the cd. "Remember The Times" is such a tune, and the same goes for "This Is The Way" on the "Rastar" riddim, the awesome "Never Change My Mind", the outstanding "I Am Blessed" over the "Show Love" riddim, Close My Eyes", and the wonderful acoustic title track "Rain On Me".

Lady Passion's "Rain On Me" is a well varied album made with style and passion. Overall a very enjoyable collection that deserves to be heard by reggae fans and music lovers alike.

After three deadly discs in our Maffi series Solo Banton is back with a vengeance and a full EP,
flinging big tunes, the mic and nunchuks alike with the ease of a Shaolin master that would even
have made Mr. Miyagi proud.

Starting the ride, "Music Addict" is setting fire to dancefloors with an almost pyromaniac delight
while still nicing up the area big time. Solo continues to spin a yarn about your friendly neighbour-
hood robbers in "Put It Back", his belt buckle slashing out just as hard as the beats. Witness an
epic martial arts battle in "Kung Fu Master", when 'Black Belt' Banton enters the dojo, riding the
knucklebuster basslines crane style and shows Jet Li how it should be done. Keeping up the
fighting spirit and finishing the trip is "One Of The Greatest", written during and about the people's
struggle for freedom in the 'Arab spring' earlier this year.

All tracks have been produced by disrupt, who fills in the gaps with "Arcade Addict" and "Last Blade"
to guarantee an extra-smooth overall flow of the matter. (Older versions of those songs can be
found in our net release section HERE and HERE).

To celebrate the 10TH 12inch on Jahtari, Ellen from MyLordSound designed an extra-breathtaking
cover in the tradition of the classic Scientiest series. 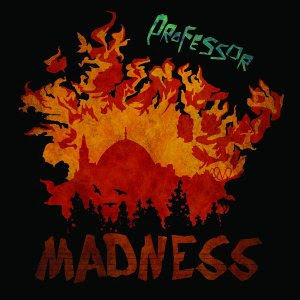 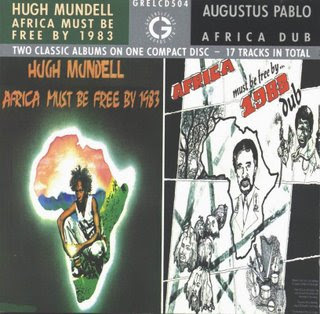 If Hugh Mundell had lived past, ironically, 1983, there's no telling what his legacy would be today.  Africa Must Be Free By 1983 is simply one of the most remarkable debuts in the history of reggae, considering Mundell was only 16 when it was released.  Guided by the adept hands of Augustus Pablo, he wrote and co-produced all of the songs on this powerful classic.  The potent roots melodies and emotional vocals provided by this prodigy blend beautifully with the robust musical accompaniment from an all-star line-up (Robbie Shakespeare, Jacob Miller, Leroy Sibbles, Augustus Pablo, Earl "Chinna" Smith, Leroy "Horsemouth" Wallace, Carlton "Santa" Davis, and more).  While no one track is spectacular, practically all are solid, as they cohere in a prototypical "album album."  Luckily for us listeners, when RAS re-released Africa Must Be Free in 1989, they threw in the equally strong dub version as well.  Although Augustus Pablo's rockers sound runs throughout the dubs (Fans will certainly recognize the music in "Book of Life" and its dub from Jacob Miller's "Keep on Knocking."), he doesn't dominate them with his trademark melodica, allowing Mundell to retain his identity.  Some of the dubs are better than the vocal versions (the dubs of "Jah Will Provide," "Run Revolution a Come," and "Day of Judgement," for example), while a few of the vocal tracks are preferable ("My Mind" and "Africa Must Be Free By 1983").  If you're like me, the track listing of the dub versions may cause some confusion.  Either Mundell named the dubs with the intention to confuse, or the track listing is simply wrong (I vote for the latter.), assuming that "Unity Dub" is supposed to be the title of the dub of "Let's All Unite," "Africa Dub" is supposed to be the dub of "Africa Must Be Free By 1983," "My Mind Dub" is supposed to be the dub of "My Mind," etc.   I list below under "Track Listing" how the songs are listed on the album, but track #9 is actually the dub of "Jah Will Provide" (whatever the title is), #10 is the dub of "Book of Life" (ditto), #11 is "Revolution Dub," #12 is "Judgement Dub," #13 is, um, I'm not sure, #14 is "Unity Dub," #15 is "My Mind Dub," #16 is "Africa Dub," and #17 is again a mystery.   I don't think that tracks 13 and 17 are dubs of anything on Africa Must Be Free; neither sound like "Why Do Black Men Fuss and Fight," the only track without a dub here.  To confuse matters, there is an extra dub (9 dubs, 8 vocal tracks).   Anyway, in the end, all that really matters is that it's all good, whatever the order.