Eric Sardinas is a bit of an enigma. The long-haired, tattooed guitarslinger would seem more at home cranking out scorched-earth heavy metal rather than playing in the energetic blues-rock style that he's perfected. One might expect Sardinas to strap on an oddly-shaped B.C. Rich Warlock, or even a Dean Dimebag tribute guitar instead of the custom-made Dobro resonator guitars that he prefers. No matter your expectations, you can always depend on Eric Sardinas to surprise and entertain.
Learning The Blues At 78rpm

Sardinas discovered the Delta blues at the unbelievably young age of six, when he first picked up a guitar. Spinning ancient 78s, he developed his unique style of playing listening to Charley Patton, Son House, and Robert Johnson before moving on to modern-era blues guitarists like Muddy Waters, Elmore James, and Otis Rush. Throw in a dash of British blues-rock, hard rock, and more than a little Jimi Hendrix and Stevie Ray Vaughan influence, and you'll have the unique, electrifying, exhilarating sound of Eric Sardinas.
Street Corner Blues

After a bit of wandering, Sardinas landed in Los Angeles in 1990. At first he survived much like his early country-blues idols, performing with an acoustic guitar on the street corner for spare change. He later put together a band, the Eric Sardinas Project (ESP), honing his sound by performing 300 nights a year for nearly six years. The band's hard work paid off, earning ESP a gig touring with Johnny Winter. Sardinas and crew recorded their debut, Treat Me Right, in 1999 for the respected jazz/blues label Evidence. Sardinas subsequently released albums in 2001 and 2003, and has since performed with bluesmen like Hubert Sumlin and David "Honeyboy" Edwards.

With his fourth album, the generically-titled Eric Sardinas and Big Motor, the enigmatic guitarist manages to turn the humble Dobro into a true musical weapon of mass destruction. Although Delta blues players would often use acoustic resonator guitars to play louder, and be heard above the juke-joint crowd, Sardinas wields his electrified Dobro as a samurai sword, slashing-and-crashing through these songs like some screaming bird of prey swooping down on dinner.
Eric Sardinas And Big Motor

The album-opening "All I Need" is a 120mph raver, built upon an unrelenting rhythm, embroidered with taut, barbed-wire fretwork. The infectious, melodic "Ride" hides its pop overtones beneath a soaring guitar line, a Gospel-tinged chorus, and a Hendrix heartbeat...kind of reminds me of Clapton-era Delaney & Bonnie. The up-tempo "Gone To Memphis" is a soulful, uplifting tune with some finely-engraved Dobro work and warm vocal harmonies.

Lest listeners think that Sardinas has gone soft, the rollicking boogie-based "It's Nothing New" turns the amp up a notch, and by the time that ES and Big Motor kick into the juke-joint stomp "Just Like That," you'll be turning over chairs and dancing on the table. Sardinas' showcases some nasty, menacing slide-playing here as the band bashes-and-crashes behind his switchblade fretwork. A relatively straight-forward cover of the Elvis gem "Burning Love" displays Sardinas' playful side, while a cover of Tony Joe White's "As The Crow Flies" offers up a true 180-proof Delta gumbo with a soulful vocal turn and imaginative six-string solos.
The Reverend's Bottom Line

Sardinas has too often been dismissed as a mere Stevie Ray clone or Hendrix acolyte, both comparisons sadly missing the mark. As shown by Eric Sardinas and Big Motor, there's a lot more going on here than meets the eye (or ear). There are many shades and textures to the songs here, and if Sardinas primarily mines nuggets of musical gold from an overworked blues-rock idiom, he's done so in his own unique style. Falling firmly on the harder-rocking side of the blues-rock equation, Eric Sardinas nevertheless plays a Dobro like nobody's business, and the songs here showcase an artist still having fun and exploring the limits of his talents and the music. (Favored Nations Records)

by  Reverend Keith A. Gordon
permalink 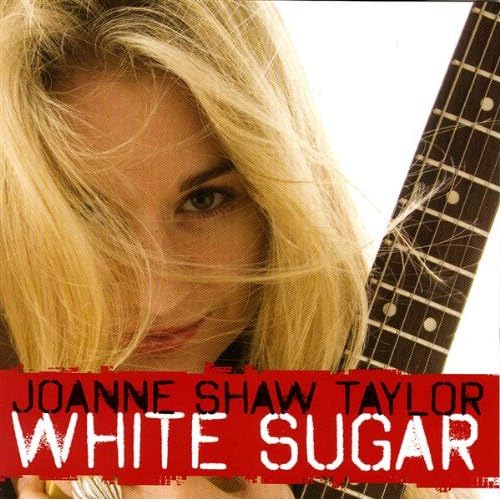 
When Dave Stewart had his big experience, Joanne Shaw Taylor was only 16. Her skills at the Telecaster were so perfect that the bluesfan and Eurythmics-frontman asked her to join his supergroup D.U.P. to tour europe in 2002. She was also offered a record contract but the label went bust. Today Joanne is 23 and happy about the fact that she took her time with the recording debut: "I wanted to take time out to really work on my craft and make sure that when I did an album it was the best that I could do."

For White Sugar Joanne took a plane to Memphis where her label RUF had booked Jim Gaines studio. Jim had worked with some of Joanne´s idols like Albert Collins and Stevie Ray Vaughan. He brought in the experienced sessionmen Steve Potts (drums) and Dave Smith (bass).

"Working with these guys was totally easy. I knew of them because of Luther Allison and the Jonny Lang albums. They didn't know the tracks until five minutes before we recorded them. I made them listen to the songs once and then play them. It was fantastic. They've got so much feeling and soul. They are amazing guys to work with."

Marcia Ball - Let Me Play With Your Poodle

This album of snaky swamp rock is one of Ball's best recordings. Great choice of songs (she wrote 5 of the 13) that let her show all her talents, both vocally and instrumentally. Slow-tempo songs display the force of her voice, as in "I Still Love You," and another of the many gems, "For the Love of a Man." Meanwhile, the playfulness of the title cut and "The Right Tool for the Job" allow her to have fun and let the band air it out. Then there is the perfect song to end the disc and an absolute tour de force, Randy Newman's "Louisiana 1927."

Ball has again assembled another top-notch cast of characters who more than hold up their end of the bargain. A few of the many who shine are George Rains on drums, Mark Kazanoff, who does double duty as a co-producer and excels on various saxes, and Derek O'Brien, who also co-produced and shares much of the guitar work with Steve Williams. If you don't know Marcia Ball, this is a fantastic introduction, and if you liked her past work this is a gem you won't want to miss. ~ Bob Gottlieb 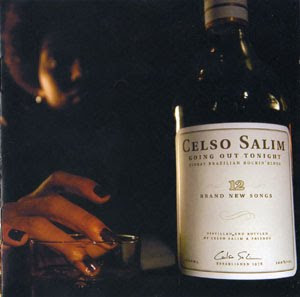 Seasick Steve - Man From Another Time

« My name is Steve and I’m your walking man » "The only thing worse than blacking out is waking up just where you are," Simon Joyner sings on Skeleton Blues, his tenth proper album, and it's certainly not the first time that Joyner has made it sound as though he's best not left alone with his own thoughts.

It seems fortunate then, for him and for us, that on this album he's rarely left alone, but has instead the full-time backing of his veteran Omaha band the Fallen Men. On such earlier works as 1998's Yesterday, Tomorrow and In Between or 2004's Lost With the Lights On, Joyner's sparse arrangements could cast his long-winded confessionals with an almost sickly, florescent-bulb pallor. Here, though, the Fallen Men feverishly work the bellows, pumping these seven overcast tracks full of unruly rock dynamism. Though their spirited presence virtually ensures Skeleton Blues to be the noisiest album in Joyner's catalog, it also leavens the bleakness of his visions enough to also make it his most approachable.

Anchored throughout by Michael Krassner's sturdy piano and Lonnie Eugene Methe's additional keyboards, Joyner's chief foils here are the pedal steel and guitars of Dave Hawkins and Alex McManus. On expansive tracks like "Open Window Blues" or "Medicine Blues", this group announce themselves with a vengeance, their furious electric interchanges naturally calling to mind Crazy Horse, as well as the most raucous of Steve Wynn's post-Dream Syndicate work, or perhaps a looser, more countrified Television.

But at the center of the commotion is Joyner and his dense, poetic narratives. For several long stretches on Skeleton Blues he writes urgent transmissions in the third person, yet this song cycle is too uniformly dire and desolate for any real authorial distance. On the apocalyptic "Open Window Blues" he piles desperate image upon desperate image ("The cicadas forever throb on the fringes of the lens/ While I dance upon this shifting pile of skeletons") so thickly his tongue can barely keep up. In doing so, he boldly mirrors the breathless cadence of Bringing It All Back Home-era Dylan, with the Fallen Men's splintered guitars doing their best to keep the comparison flattering.

"Medicine Blues" returns again to these same darkened territories, with one eye fixed on the newspaper headlines ("What color is the ocean after the oil?"). But Joyner's dread lifts uneasily on tracks like the tender country lament "Answer Night" and on the album's dramatic centerpiece "The Only Living Boy in Omaha". Buoyed by cellist Fred Lonberg-Holm's graceful string arrangements, this latter track is likely the most gorgeous piece Joyner's ever created, a bittersweet hymn to the imperfect homesteads we're never fully able to abandon. It's a vivid portrait of a place and the lives it contains as a recurring dream, as Joyner sings, "Parades, alcohol, and love's swinging phantoms/ If everything rolls around again, does that mean we are free?" over a veil of strings and pedal steel as pure and aching as a late Great Plains rainstorm.

As always with a Joyner release, the biggest obstacle for many listeners will be his voice. Although at this point he sounds at peace with his vocal restrictions, his narrow range leads to melodies that seem like shadows or suggestions; as usual, his work practically begs to be re-interpreted by a more adventurous or powerhouse vocalist. After the rich opulence of "Only Living Boy", the album's closing two ballads feel somewhat anti-climactic, Joyner's narrators searching once again for a brief respite from their downcast isolation, those quiet moments when "a soft light lit in a bedroom can bring a tired traveler to his knees." Yet with the reliable assistance of the Fallen Men, on Skeleton Blues Joyner is once again able to devise a good number of such transfiguring moments.