Hanni El Khatib - Will The Guns Come Out 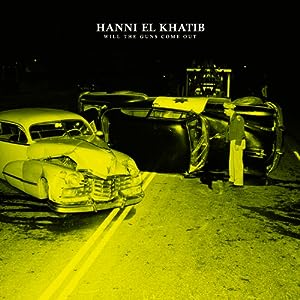 These recordings from the Kansas City threesome, JPT Scare Band, from 1973-75, have been
bootlegged for eons at pricey sums. Finally, Monster Records delivers the prime cut of
psychedelic hard rock to you, the people, and hopefully the band members will finally get to
see some cash flow out of their work.
If the band had a signed record contract back in the early ’70s, there is no doubt they
would be up there with Jimi Hendrix, Cream, and Black Sabbath for guitar overload
damage. Unfortunately, these recordings never really made it out of the inner circles of hard
psych heads. Of course, Sleeping Sickness isn’t a copy of those bands or their styles, but the
main focus here is very long (often 10 minute plus) jams that concentrate on the guitar playing
of Terry Swope.
Swope takes a riff and destroys it over and over, until you aren’t sure what came before the
moment you are in. A perfect example of this is the Hendrix-y opener and title song, "Sleeping
Sickness." After a funky opening, a tight riff starts to dominate the song. After the verse-chorus
part, Swope takes flight with about 10 minutes of pure guitar damage. Solos twine in and out of
each other, with excellent use of feedback and fuzz pedals, while drummer Jeff Littrell and
bassist Paul Grigsby seem almost telepathic and tapped into wherever Swope is taking his
guitar.
Perhaps what makes Sleeping Sickness stand out more than anything is that it doesn’t sound
dated at all. I am sure there were bands all over America at that time, gathering in basements
and playing for hours and hours under a variety of conditions. The JPT Scare Band recorded
most of this stuff in the basement of their party house in Kansas City. While it does date from
the mid-’70s, Sleeping Sickness definitely has a "’60s" feel about it, in terms of the freedom of
the players and how well they play together, as opposed to the bass and drums sitting back
while the guitar player gets all the glory. Of course, the guitar is the star of this show, but it
wouldn’t be anywhere near as entertaining if the other musicians didn’t keep their collective
feet on the ground, at least a little bit.
While the sonic fidelity on this isn’t exactly up to Pink Floyd standards, that isn’t what you are
getting this for anyway. This is a classic snapshot into the basement of a true American Rock
Band doing what they do best. It is easy to imagine all their friends freaking freely to their
brand of tripped-out, space-vibe rock. Interesting liner and production notes round out this
great package (lots of photos, lyrics, etc.) and proves that, in the mid-’70s, not all of American
rock was asleep or staring at its navel. 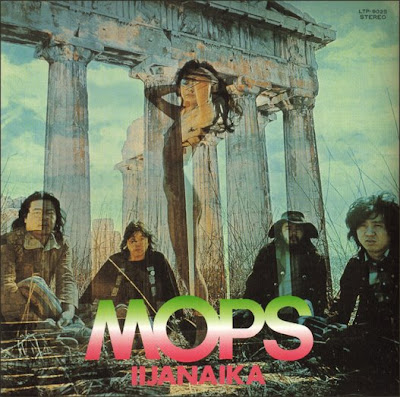 The released their third album in the year that was Japan's triumphant time to shine, 1971 (according to Julian Cope's Japrocksampler.com . This is a solid journey through Heavy Psych, Garage, Folk and Blues.

Often overlooked, The Mops were a band that obviously emulated the U.S. hippie scene (Jefferson Airplane) as well as the UK heavy rock scene (Black Sabbath) but did it with their own charismatic personality. At times acidic, epic and gritty; and at other times over the top with its campy heartwarming tenderness, Iijanaika runs the gamut of historically strange Japanese musical affinities. 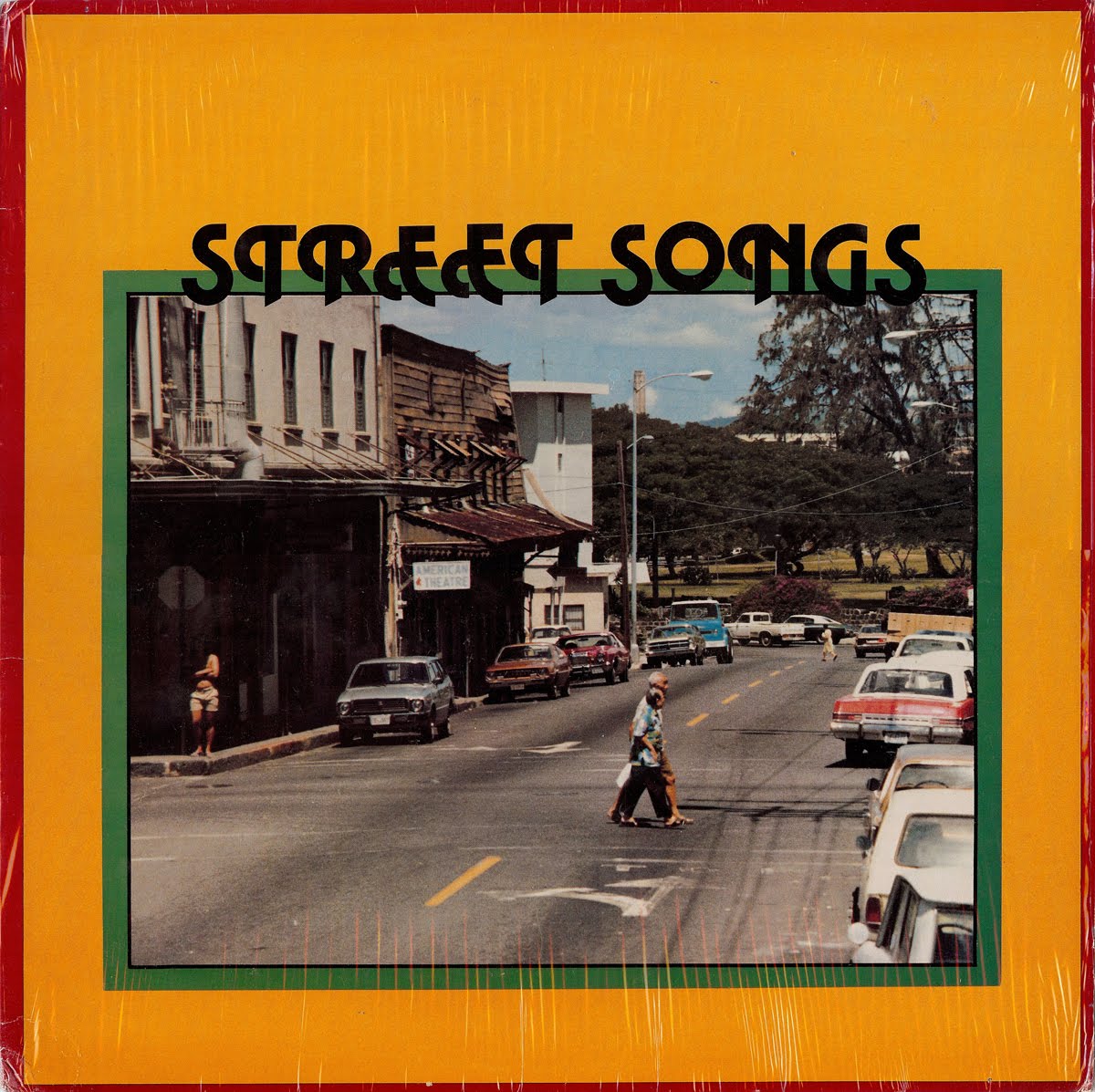 If I had to distill the essence of this album down to one word, I would go with Maelstrom. If I've got two words to work with then it's Shit Storm. Howard Nishioka, who plays electric and acoustic guitar and bass guitar (and vocals on a couple songs), sounds like a man tearing holes in the atmosphere to get at those bright stars shimmering above his secluded Hawaiian compound deep in the woods.
In truth, I don't know if he really recorded this out in the trees but that's how I imagine it. On the other hand, he called the record "Street Sounds" and the colors bordering the rather incongruous street scene could cause one to mistake this for a reggae record, instead of the uncompromising fried improvised pyschedelic folk masterpiece that it is. Maybe the disconnect between the cover and the music are what kept most psych afficianados off the scent for nearly 30 years (the album was released privately by Nishioka in relatively small numbers in 1979).

As ferocious and chaotic as this record gets at points, there's also an underlying calmness and gentleness and some mellower tracks that balance things out nicely. Howard is joined on two long songs by drummer Byron KitkowskyÂ  (who compliments Howard's shambolic style expertly),Â  and recording engineer Richard Kon contributes washboard and shouts. On the back cover, one finds a concise summation of Nishioka's approach to sound (and life?): "Screw Limitations!!!" 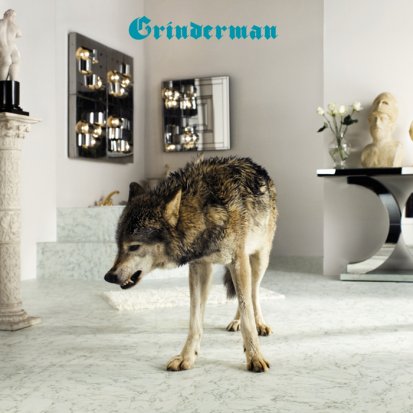 For the most part France is missing from the instrumental world. Every now and then a French band appears with an interesting sound, only to disappear again into obscurity without making a mark on the world. Don't Look Back might be the first French instrumental band you really need to pay attention to. Taking a multifaceted approach to the post-rock genere, Don't Look Back combines audio samples with gut-wrenching screams and slams it on top of a post-rock instrumentation that quickly drops from angelic, quiet sounds to blistering metallic riffs. Brighter is one of those albums that many will sit through with jaw wide-open, shocked and amazed by the sounds washing over their body. Much like Rosetta's The Galilean Satellites, Brighter leaves the listener with the punched-in-the-stomach feeling that begs for more. This may or may not be the beginning of a movement for French instrumental bands, but in any case Don't Look Back has shown that they are a band to be taken seriously.

The debut EP Cities from Austin band Politics is out today and available for FREE download via the bands BC page or direct download by following the links below. We will be sponsoring the bands release party this Saturday at Emo's with Radiation City and Carver. You can purchase tickets for the show in advance 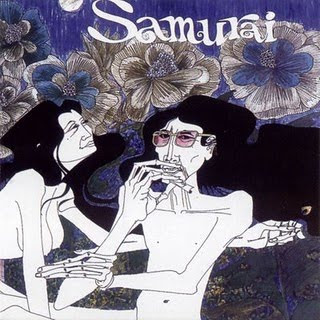 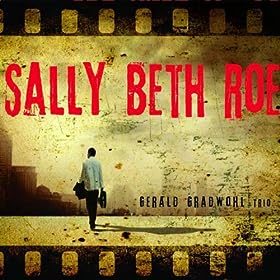 Austrian guitarist Gerald Gradwohl has been making great fusion records for years. A highly skilled soloist, Gradwohl's style combines the hip lines of a jazz player, with the technical proclivities of a shredder. Though he has loads of session and sideman work in his background, his solo projects - particularly ABQ (Emarcy/Universal 2003), and Tritone Barrier (EMC 2007) - are what put him on the map as a force to be reckoned with in the world-wide guitar community. Those albums featured keyboards, horns, and laudable guests such as Bob Berg, Kirk Covington, and Scott Henderson. For his latest recording, Sally Beth Roe (Gtone), Gradwohl changes things up and goes for a bare-bones, stripped down approach. It's a pure trio album, recorded with few overdubs, and no guests. The result is one of the rawest, rocking fusion discs I've heard in some time.

Right from the opening whammy bar outburst of the title track, the album's "live in the studio" feel is apparent. It's a fun, loose recording, and the chemistry between Gradwohl and his trio mates Farid Al-Shami (drums), and Jojo Lackner (bass) is palpable throughout the disc. If I had to label Sally Beth Roe stylistically, "Heavy fusion" would be the best moniker to use, though some tracks are closer to instrumental rock ("Time to Play"), or blues ("Blues For Ben," "Stevie"). Gradwohl seems to shine best on the groove-based fusion material, where he can stretch out harmonically (as a writer and soloist), and lock in with his band for some dynamic group interplay. "Tunnel Elevator" and "Maths" are two great examples of this.

"No Matter" is another standout track that is pure fusion. It features some of Gradwohl's most legato-oriented playing on the album (though he still throws in some insane Gambale-esque sweeps), a nice bass solo from Lackner, and a great memorable melody. Listening to this track and others, it's clear that Gradwohl knows well how to arrange this type of material for a trio setting. His chords are often deployed in short staccato bursts, and there's plenty of doubled lines with the bass. There's a couple of fine ballads on the disc as well - the acoustic and improvisational closer "Joni," and the deliberately paced "Hope" (which is not the Mahavishnu Orchestra piece of the same name, but it seems to take inspiration from some of that band's epic ballads).

Regardless of it's style, every song on Sally Beth Roe is driven by Gradwohl's guitar. Though he's got chops to spare (particularly with his picking), Gradwohl's great strength is how seamlessly he can drop in a cool altered line or triad-based idea in middle of a shred-filled solo. And while he has an original musical voice, he's not afraid to wear his influences on his sleeve either. Pieces like "Maths" and "Viper" have strong shades of post-Tribal Tech Scott Henderson, whereas "Wayne II" owes it's title and inspiration to Wayne Krantz. And like those great players, he's not shy about his tonal choices. Gradwohl favors a heavier rock-oriented tone throughout most of the disc, which he sometimes kicks up a notch by adding over-the-top fuzz effects. It's a very natural tone, however, which enhances the live feel of the entire album.

A lot of great fusion has come out of Europe lately, and Sally Beth Roe is no exception. Definitely recommended.