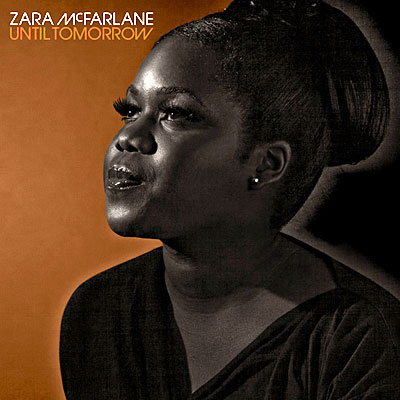 By Zach Cole from http://potholesinmyblog.com

trans Zara McFarlane Until TomorrowWe’ll get the obvious out of the way right off the bat. Zara McFarlane’s Until Tomorrow is a deliberately retro exercise in jazz vocals, and an remarkably well-executed one at that. Externally, the album art nods not-so-subtly to late-50’s Ella Fitzgerald, so it’s quite fitting that the opening jazz ballad, “More Than Mine” dates right back to that era as well. However, it’s not merely McFarlane’s ability to recall her predecessors with striking accuracy that gives Until Tomorrow its backbone, but it’s the balance with which the album pools various musical stylings together without once sounding jumbled or confused.

Until Tomorrow weaves between slinky swing tracks, be-bop and smooth ballads, while tossing around various instruments all the while. Many tracks are primarily piano-backed and barely whisked with light percussion, which fits Zara’s warm vocals well. It’s on these tracks that listeners might be reminded of Brownswood contemporary Jose James. Other tracks are less structured, orienting themselves around the freewheeling and experimental side of jazz. The standout track, “Feed the Spirit (The Children and Warlock) is a bass-heavy affair that has Zara doing her best Yukimi Nagano for the first half, while the latter lets loose into an all out Coltrane mish-mash. It’s unorganized, unpredictable, and altogether satisfying. Meanwhile, the title track provides welcome contrast as it is almost lullaby-worthy.

The album’s ability to pass between various sub-genres of jazz is impressive, but make no mistake – this is Zara’s stage from the very first note. Her vocals command your attention, not in the Alicia-Keys-gonna-kill-my-vocal-chords way, but simply because she is able to gently exude deep emotion with each word. She has a profound discourse on the life of relationships and love, which granted is not the most original of all topics, but Zara performs her songs with a level of authenticity that is not easily (or often) replicated.

In case there was any doubt about it before, this album just cements the fact that Brownswood, along with Tru Thoughts and a handful of others, stand steadily at the forefront of modern jazz. But it should come as no surprise. With new artists like Zara McFarlane in the roster, this is an exciting time for the UK jazz scene with fresh voices emerging each year. Until Tomorrow is a fascinating listen that at once hints at the past and the future simultaneously.