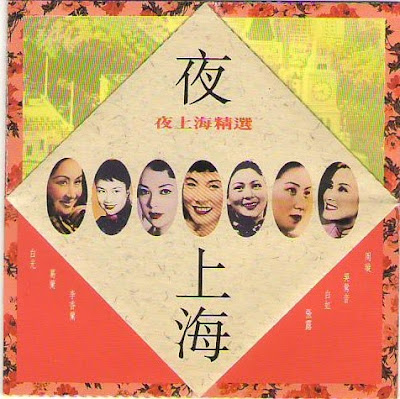 In the early 1990s EMI Hong Kong transferred dozens and dozens of records from the cosmopolitan film and club scene of 1930s-1940s Shanghai to an extended series of CDs. The recordings were from the legendary Pathe label; and as near as I can tell fell out of print, and were unknown outside Chinese record shops, which, fortunately, I had the odd habit of trolling in the 1990s. New York City has a huge Chinese community and I've found lots of interesting music in Chinatown shops, though it can be completely hit or miss. As has been pointed out, sentimental pop love songs are HUGE in China even today, PRC, Hong Kong and Taiwan all included. Fortunately, this CD turned out to be a hit.

Before the second world war, Shanghai had become, by all accounts, the cultural doorway through which European and American influence arrived. The questionable relationship of Western powers and Western capitalism to corrupt, doomed Republican China is the topic for another blog than this one; let it be said that this collection of old-fashioned pop tunes shows that Shanghai had become a veritable sponge of diverse cultural influences.

Some of the songs here attempt to bring a more traditional Chinese sound to pop ballads, and these (esp. the tunes by Wu Ying-yin) are not the reason I'm posting this here. The songs that show a huge American influence are amazingly bouyant slices of nightclub jazz pop, albeit the kind your grandparents dug. The highlight here, don't miss it, is the super-swinging "I Want You To Love" (track 8), sung partly in heavily accented breakneck English: "Listen to your mama and you never will regret it..." Track 5 is also tops, and it sure sounds like this tropical Afro-Cuban number begins "Ja Jambo": Unspeakably Happy is about right. Track 6, "Give Me a Kiss" is another swinger, with a drum solo, and a swinging solo violin. The opening track is great as well, with an old-fashioned movie sound to it. Track 10 is similarly cinematic, with sweeping strings.

If you enjoy old-fashioned female vocalists and pre-bebop jazz, don't be put off by the fact that you won't understand most of these songs. This is really an entertaining listen.

The original CD came with the most elaborately folded booklet I've ever seen; a single sheet folded up origami-like with layers of flaps that give it a unique three-dimensional feel. I've included scans of most of it; it's 97% in Chinese. (I can't recommend Google Translate enough!)这是一个非常有趣的记录。喜欢它！