V.A - Orishas Across The Ocean 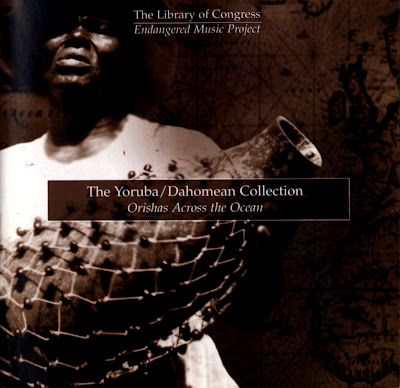 As winter progresses, long after its foliage has been shed, the tree loses most of the moisture in its trunk and must rely more than ever on the sap stored in its roots. In this spirit, Soundological would like to share with you a healthy helping of the musical equivalent of sap from said roots and the wellspring from which the branches of most musical traditions featured on this blog -- Blues, Jazz, Soul, Gospel, R&B, Funk, Rock & Roll, Hip Hop, etc. -- have extended themselves.

Long OOP, this CD fetches a high price (a new copy can go for upwards of $70) and is valuable not only for its pristine presentation of remastered material from the Library of Congress (that's why these recordings fall under the public domain) but for the reverent and revelatory booklet that provides enlightening reading regardless of the degree of familiarity one may have with the religious and cultural diaspora from Mother Africa. One might say this collection is essential for both its text and context, so if you were not fortunate enough to find it a decade ago it's highly recommended you take advantage now.

The 24 tracks featured on this compilation are aural snapshots of Haitian Vodoun, Cuban Santeria, Trinidadian Shango, and Brazilian Candomble religious ceremonies. They were originally recorded between the late '30s and the mid-'50s by such notable ethnologists as Laura Boulton, Melville Herskovits, and Lydia Cabrera. Culturally speaking, these recordings highlight African diasporic religions that originated with the Yoruba and Dahomean peoples and were brought to the New World with enslaved Africans. Retrieved from deep storage at the Library of Congress and digitally remastered by a team of audio experts, The Yoruba/Dahomean Collection: Orishas Across the Ocean is a powerful audio record that documents both the proud cultural legacy and sophisticated musical practices associated with Afro-Caribbean and Afro-Brazilian cultures.