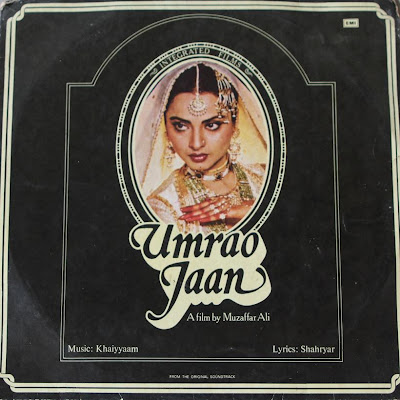 Umrao Jaan was released in 1981 to great critical acclaim but lukewarm public response. No doubt its literate script, nafees Urdu and historical setting was beyond the appreciation levels of the average punter. But in the 30 intervening years, Asha Bhosle’s singing and Rekha’s dancing have only grown in stature. Buy any collection of Asha’s amazing career of hits and you’ll find every song she sang in Umrao Jaan. They are still considered the absolute peak of her grace and creativity. Rekha, known more for her racy roles before Umrao danced and acted her way to the 1981 Best Actress Award and then went on to seal her status as a serious artiste.

The soundtrack is the most complete expression of music, lyric, emotion and drama Bollywood has ever produced. The director, Muzzafar Ali, was at pains to recreate mid 19th century society of the tawwaif (courtesan) with as close to perfect verisimilitude as possible. And so elaborate costumes were sewn, the most evocative havelis (manors) used as sets, elegant refined Urdu was spoken and of course authentic period music played throughout. And to bring all of this to life he employed the best artists and craftsmen. The lyrics were written by the accomplished Urdu poet (and professor at Aligarh Muslim University) Shahyar and the music composed by the equally brilliant Khayyam. Together they created a musical and lyrical atmosphere that leaves the listener weak at the knees with the beauty of it all. Not just the stunning gems of Dil Cheez Kya Hai and In Aakhon ki Masti and Justuju Jis ki Thi and Yeh Kya Jagah Hai, Dosto. These masterpieces are supported by classical ragas, folk music and ghazals that paint a comprehensive picture of the musical landscape that was kingdom of Avadh (Lucknow). Alert readers of the Washerman’s Dog will remember that the instrument, the sarangi, rose to its preeminent place in Hindustani music as an accompanist to the courtesans of the 18th and 19th century such as Umrao Jaan. You will hear lots of sarangi on this soundtrack.