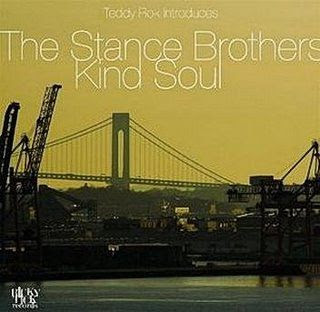 The Stance Brothers is a new project by Teppo "Teddy Rok" Mäkynen, producer, drummer and live band leader of the globe-trotting Five Corners Quintet. The visionary behind the late Teddy Rok Seven and producer of such Finnish jazz luminaries as Jukka Eskola and Timo Lassy , Mäkynen and his new Stance Brothers project is a rhythmic force to be reckoned with.

The Stance Brothers represent raw garage jazz in its purest form. Who are these mysterious Stance Brothers? Vibesman Isiah Stance, his bassist brother Dwayne and the phenomenal drummer Byron Breaks are naturally responsible for the music we hear on the record, but still it seems that they are rather the embodiments of all the lost cult funk legends. The core of The Stance Brothers' sound stems from countless of hours spent jamming at their dusty garage. The trio's unfaltering will to excel in playing funk-influenced garage jazz comes second only to their passion for shooting hoops at the nearby basketball court.