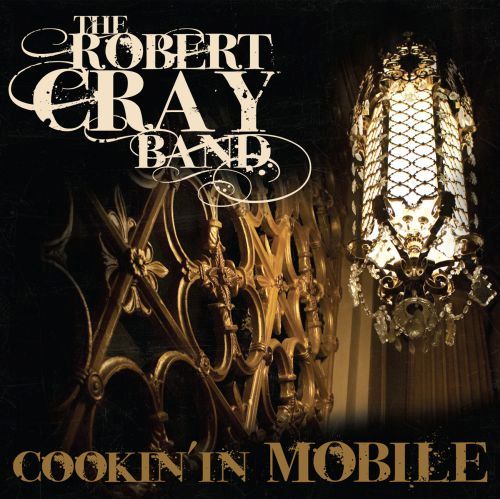 Robert Cray may be a gloriously reliable musician when it comes to live performances, but he has become decidedly erratic when it comes to album releases. For 30 years America’s most successful contemporary blues guitarist and singer-songwriter didn’t release a live album, but now there have been three in just four years. In 2006 there was Live from Across the Pond, recorded at London’s Royal Albert Hall when he was opening for Eric Clapton (rather confusingly, the title wasn’t changed for its UK release). Two years later came Live at the BBC, featuring 1988 and 1991 recordings from London’s Hammersmith Odeon. Now comes yet another live album (which is also his first live DVD release), recorded earlier this year in Mobile, Alabama.

As expected, it’s an impressive set that provides further reminders of why the hard-working and versatile Cray is such a popular live performer. But his followers should check their CD collections before purchasing, for he repeats a lot of both his most recent and best-known material. Four of these songs appeared on last year’s studio album, This Time; four more were on his Across the Pond set; and two on the BBC album. That old favourite from 1986, Right Next Door, appears on all three live albums.

Cray has succeeded by creating a style of his own, mixing blues with anything from soul to rock and gospel. He has his critics, who find his approach too cheery or lacking in edge for a blues singer, and there are certainly passages here where he eases off with laidback, relaxed songs like the soulful Lotta Lovin’ and the ballad I Can’t Fail. But he’s also capable of pained and emotional vocals, as on Our Last Time, and he’s an inspired guitarist.

The high points include his pared-down treatment of Sitting on Top of the World, a song made famous by Howlin’ Wolf and BB King, and – best of all – the live treatment of Chicken in the Kitchen. A slow blues, concerned with sex, cooking and infidelity, it builds to into a magnificent instrumental work-out, with Cray’s guitar sparring with the keyboards of Jim Pugh, who has been playing an increasingly important role in this excellent band.
By Robin Denselow.
**
It’s hard to imagine being a perpetually broke member of the middle class and still having more money than sense but that’s the only conclusion I can draw when I do something like what I did this week.  Dave Ramsey would probably spontaneously combust if he saw what I spend a month on music and I’m fine with that because I have a few choice words for him, too.  He’ll die richer and we’ll both be dead.  Maybe he’s having fun.  I hope so.  I know I am.  That said, even I have trouble justifying this latest stunt of mine.

I plunked down $13 to buy the latest live album from Robert Cray, whose previous work has left me mildly dissatisfied.  It’s one thing to spend money buying music you like but my addiction to the musical gods has become so great I’m buying shit I don’t like.  I started to get worried.  Why would I do such a thing?

Maybe it was the Alabama connection, as the live album was recorded in Mobile.  Maybe it was seeing a CD/DVD package for $12.99.  I’m sure the vast amount of blues listening, writing, and coverage I’ve been doing here on the site played a part in it too.  I don’t know what it was exactly, but I felt compelled to roll the dice on Cookin’ in Mobile, secure in the knowledge I’ve wasted more money on dumber ideas.

What some have heard as too smooth, polished, polite, and formulaic has also been praised as an elegant, stylish blend of blues, soul, R&B, and gospel.  Listeners in both camps will find plenty to bolster their respective argument although I daresay his detractors might be surprised by what they hear.
He still has the sweet high-register voice after all these years and the stylish guitar leads that have sometimes felt too clean or restrained on record are extended and played with just a little more grit, grease, and fire here, whether playing newer songs like “Love 2009″ and “Anytime” or songs from his Strong Persuader album like “Smoking Gun” and “Right Next Door.”

Speaking of Cray’s lone crossover hit, we’ve seen many an artist grow weary of playing their hit or hits.  I don’t know how many times over the past 23 years he’s gotten tired of that “well-known smoking gun” but on this night he performed “Smoking Gun” with ease and intensity.  It’s hard to believe it’s been that long and amazing to hear him still able to hit every one of those notes.   He adds some fierce guitar licks to the precise vocal phrasing, giving fans that came out to hear this song in particular something to remember.

Cray indeed cooked in Mobile, so much so that the only complaint to lodge against this set is that it leaves you wanting more than 12 songs and 75 minutes.
By Josh Hathaway.
**
In the 1980s, when rock music took a slick turn and anyone playing the blues was kind of poo pooed, several artists carried the torch until the rest of the music world woke up from their hairspray-induced coma and rediscovered the blues. The two most prominent were Stevie Ray Vaughan and Robert Cray. Cray’s status is often overshadowed by the flashier Vaughan, but his place in the annals of blues rock is just as important as the deceased guitar god from Texas. The Robert Cray Band has continued to put out solid, plucky albums (18 so far) since their debut in 1980, while still dazzling audiences with their phenomenal live concerts. That expertise of the Robert Cray Band is on full display throughout Cookin’ in Mobile, this new CD (a DVD of the same concert is also available).

Recorded earlier this year at the historic Saenger Theater in Mobile, Alabama, Cray and his solid backing band of Jim Pugh on keyboards, Richard Cousins on bass and Tony Braunagel on drums, deliver a tight set of songs that rock the house right from the get go with the opening scorcher “Our Last Time.” Classic hits like “Right Next Door” and Cray’s signature song, “Smoking Gun,” are opened up for extended jamming between the musicians. The latter clocks in at over seven minutes as Cray decides to school his audience on what blues rock guitar sounds like. Elsewhere throughout the album, Pugh takes the spotlight, in particularly on “One in the Middle,” which has a killer organ solo by Cray’s longtime sideman.

While the album may appear to look short with just 12 songs on it, in actuality, only two of them clock in at under five minutes. What you get on Cookin’ in Mobile is a real concert experience, with the band giving the songs new life from their studio counterparts. You may not be able to see each pained expression Cray gives when making his Fender sing, but you can feel the passion from his playing on every track. If you’ve never had the opportunity to catch the Robert Cray Band in concert, Cookin’ in Mobile is a fine place to start.


By Scott Malchus  for  http://route66sl.wordpress.com