The Haggis Horns - Keep On Movin' 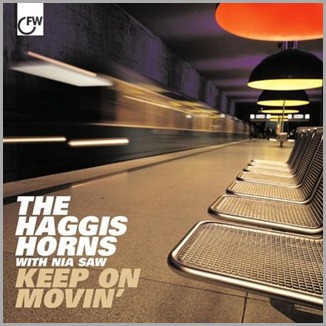 As we’re on a roll call, not only have the Haggis Horns worked with these chart toppers but also some FLY favourites like Nightmare On Wax, Roots Manuva, Mark Ronson and The Cinematic Orchestra and released their debut album, Hot Damn!  in 2006 when they were well on their way as the British Dap-Kings.

All was going so well and then founder member and Corinne Bailey-Rae’s husband, the band’s saxophonist Jason Rae tragically died passed away 2008. So, second guessing, this album is formulated on the theme of album title, Keep On Movin’.

Whilst this album is coming out on First Word (can you believe Jonny Trunk hadn’t hard of them? This is catalogue number FW55 after all!), the groove is real Freestyle Records, Mr. Finewine and Keb Darge so to speak.

Kicking off with the opening track, ‘Way Of The Haggis’, the Haggis Horns are in full front line blowing action (with funky guitar and strings!). This instrumental sets a high standard but certainly gets us in the groove.

As long time lovers of Alice Russell, Nia certainly has the same funky soul when she joins in on tracks ‘Pass It On’, ‘On The Edge’ and the title track ‘Movin’ On’.

She also features on ‘Too Blind’ and ‘The Cockroach Grind’ which may remind those with good memories of the groove of Scotland’s Average White Band whose’s ‘Pick Up The Pieces’ was so influential back in the day. The Haggis Horns take on this period/classic/style is ‘Putting On The Beef’. Sounds like a euphemism I know, but this is meaty funky soul jazz and comes into the Jazz Chronicles category of “future classics”.

‘Love Gets You High’ probably even more so as the Donald Byrd/Frizzell Brothers influence is all too clear to hear. For rare soul 45 b-sides from New Jersey/West Orange, check out ‘The Snarf Dance’ (what’s Snarf?) and the instrumental ‘The Jerk’.

Whilst label mates The Simonsound are completely different to The Haggis Horns, there is a lineage from funk to soul to hip hop, breaks and beyond.

Ending on a track called ‘Keep On Dancing’, dancing is definitely what you’ll want to do when you’re listening to this album as The Haggis Horns have some of the hardest funk, soul and jazz around town - keep on movin’ people to the sound of The Haggis Horns.