The Bombay Royale - You Me Bullets Love 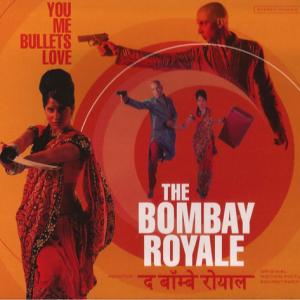 The Bombay Royale is a dedicated homage band, bringing the classic cult days of Bollywood into the fore with a storm. It is a cinematographic band in that the looks, the moves and the music video are at least of equal importance to the music. Actually, the whole enterprise here has totally integrated the aesthetics of 1960s and 1970s Bollywood, both visually and sound-wise.

At this point I have to admit that my knowledge of Bollywood’s golden age is rather limited; however, I  know that the sounds of that era constitute a bottomless vessel of invaluable sounds as they have been used routinely as samples in electronic music, hip-hop etc. I am sure that there are tones of exceptional music from that time & place still to be unearthed for the international audiences.

Some artists of Indian descent like Bally Sagoo have already tried to bring some Bollywood sounds in new music forms, but here we have a radically different approach. The Bombay Royale do not just feature some Bollywood samples here and there, they are a total recall in the most authentic way possible. The whole artistic direction, from the instrumentation, the production, the clothes, the cover, the video and the ways of singing reinstate the unruly cinematic imagination of that era.

They want to party, they want to create mayhem, they came to impress. In such cases, when artists are so provocative with the aim to attract as much attention as possible, I am usually on the skeptics’ side. More often than not the packaging is fancy but the essence is absent – and a band’s essence is to play good music. So what about the music here?

Led by the musical director and founder Andy “The Skipper” Williamson and the vocal duo Parvyn ‘La Femme Mysterieuse’ Singh and Shourov ‘The Tiger’ Bhattacharya, the Bombay Royale, surrounded by a host of skilled session musicians, deliver wholesome, fully instrumented, funky South Asian surf-a-delica. The music is high-octane masterfully orchestrated and adherently vintage in the vein of a growing number of retro-funky orchestras out there (e.g. The Funk Ark).

Right from the uncompromising instrumental opener ‘Monkey Fight Snake’ they set the stage borrowing the vibes of the Budos Band, the bizarre funk/soul maestros. The organ gives the command, the mysterious woody chords dance like rattling snakes, the tablas place the Asian timbres in the right place while the horns are lashing out insistent irreverent verses. Everything is consistent and tightly arranged with memorable parts but there is even room for some playful improvisation.

The title track is the first single of the album with both vocalists stepping closely on Bollywood tones – the horns are impressive again unleashing a massive sound. With a big band like this and such a quality analog production there a level above the rest of retro lovers. Production-wise and with all the spaghetti vintage atmosphere, Calexico come to mind.

‘Sote Sote Adhi Raat’ is laden with outrageous vintage bleeps and tape echoes which sound like a Hawkwind space rock revival while ‘The Perfect Plan’ is quite poppy with mysterious exotic melodies, a fiery rhythm section and blazing bhangra guitars. I bet that it is going to be their second single. ‘Bobbywood’ reveals more openly their ethio-jazz influences or their affiliation with Cambodian pop-influenced psy rockers Dengue Fever.

Every song reveals another facet of the Bombay Royale – their material is well-revised and the influences are as wildly diverse as they used to be in the era of Bollywood’s most boisterous experimentation. ‘Phone Baje Na’ is probably the perfect closer with an infectious dubbing pulse, slow, hypnotic and adventurous – a dose of evasion.

Gladly, bands like the Bombay Royale appreciate more the classic saturated colours and outward world mash-ups of the 1970s than the polished digital productions of today. ‘You Me Bullets Love’ is a strong debut, it sounds as if the band members were playing together for years. I am waiting with curiosity to see how far they can go with this ensemble.