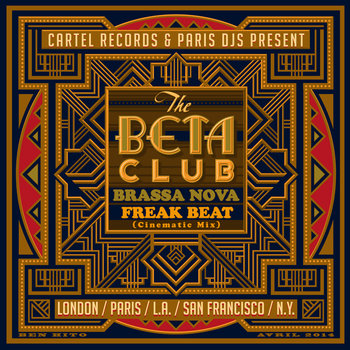 ﻿BIOGRAPHY
THE BETA CLUB is a new, fresh collective of musical minds from around the globe, gathering band members from London, Paris, Los Angeles, San Francisco & New York…
Expect their forthcoming projects to be cemented on wax and brought to you live in a venue/festival over the coming months.

The first single, 'Brassa Nova', will be available on may 6th, 2014, and will soon be followed by a reggae rework of the same tune.

BAND MEMBERS
Coventry-based funk and soul DJ, sound engineer and multi-instrumentalist Sten La' Ren (a.k.a. Shaun Stenton) is leading the project from the UK, along with his label partners from Cartel Records UK, Carl Platt & Matty Thompson, also from Coventry.

Carl Platt, percussionist is also a Funk and Soul DJ… Singer, guitarist and harmonicist Matty Thompson from Coventry-based band Jopsons Mercury is co-writing & part of the adventure. L.A.-based Steve Haney (from Jungle Fire) is bringing in his instantly recognizable percussion skills. Trombone player Ben Greenslade-Stanton (The Mighty Mocambos, The Getup, Gizelle Smith) is in charge of the horn arrangements. London-based multi-instrumentalist, producer and tiger masks owner Shawn Lee applies some of his magic in The Beta Club projects, be it drums, guitars, ethnic instruments or synths. Also from London, The Rufolo Bros., Nick Rufolo & Michael Rufolo (also known as The Brothers Nylon), are in there to compose and arrange the string parts. Nick Rawe, also from the Jopsons Mercury band, is the lead guitarist. Andy Black Rose' role in the project could be summed up as 'drummer & animal.'

PRESS RELEASE
The Beta Club is a hub of musicians and producers from all over the world, with headquarters in the UK and antennas in the US & France. 'Brassa Nova' is their scorching first single, released jointly by the Cartel Records (UK) and Paris DJs (France) labels on may 6th, on digital and 7 inch vinyl formats.

'The times they are a-changin' as the Bob saying goes, and indeed when like-minded artists from the same musical universe gather forces to build a mutual brand (and band), eyebrows get raised and something seems to be floating in the air…

With a broad sweeping theme over busy movements, 'Brassa Nova' is a panoramic sunrise song growing in magnificence to climax. Utterly dusty while dynamically uplifting, the tune's mood covers past centuries and also present-day ceremonial. Try to imagine The Budos Band recording a song for a Steven Soderbergh or a Kim Jee Woon soundtrack with David Holmes and you're nearly there!

B-side 'Freak Beat' adds more mystery to the international project that is The Beta Club, and could easily be extracted from the same movie music as the tune on the flip. Opening with an ethnic feel and doomful strings, before engaging into a captivating feel with a multi-cultural vibe, 'Freak Beat' is a pure cinematic, post-trip hop experience.

With influences ranging from David Axelrod, Ennio Morricone & John Barry to Joe Cuba, Lee Perry, Norman Whitfield, Antibalas or The Poets Of Rhythm, The Beta Club are zealous about what is pleasurable for the senses.