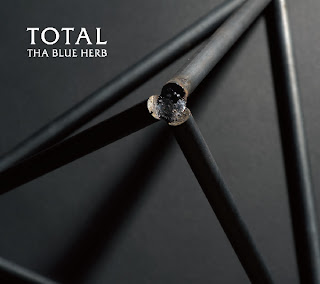 At first glance TOTAL looks like the beginning of a work of art in a studio or perhaps an obscure piece of art in a museum, either way there is no way to judge it by it's cover.

It's been five years since  THA BLUE HERB last released an album and besides a few singles they've been mostly quiet except for touring extensively and releasing two live/tour documentaries. TOTAL has been five years in the making and BOSS has had a lot of inspiration for his lyrics, but can it match their previous albums?

TOTAL starts off with an INTO RAW, an intro that as the title says, has a lot of  raw energy with a mixture of instrumentals that could easily be in any video game or film, it's that good at conveying emotion Definitely worthy of a battle scene in any period film. After INTO RAW we're sent into BOSS's world with WE CAN...

This song makes you feel like you're on a train going through Sapporo in the dead of winter, perfect traveling music with a great vibe. I can see why this played during the TOTAL CM and it showed the perspective of someone on a train in the Hokkaido winter. This song is totally about BOSS repping his home town, lyrics such as "This is Sapporaw. 47 Prefectures ROCK ON ROCK ON Susukino South 7th street At Home. From platform no.5 to the new Chitose Airport" This song is definitely about where Boss comes from and his perspective on life coming from a working class town in the isolated island of Hokkaido.


The next song called Everyday New Dawn starts off like a Herbest Moon song usually would (Herbest Moon is BOSS's side project of nothing but DUBSTEP and Dance music along with Calm), but with BOSS's trademark rapid fire rapping. It's a very good song to dance to, but don't let the mood fool you, this is about the road ahead and Phase 4 is about to begin. (For clarity please see their EP Phase 3 and their latest DVD Phase 3.9). The next song titled FULL MENTAL JACKET is BOSS's attempt as telling us who is he as an artist and his beginnings from B-BOY to rapper. The beat is very catchy and the piano is beautiful.

The 5th track is called Saturday Night, Sunday Morning & Afternoon and it truly makes one think of partying all night and into Sunday. If there's anything Boss loves it's party music and this song is definitely a hommage to that. SNSM is a brillaint mixture of BOSS's rapping skills and the instrumentals of a HERBEST MOON song. You could definitely hear the first half on a DUBSTEP mixtape anywhere in the world. Halfway through it stops abruptly with a crowd cheering and goes into another side of TBH with O.N.O.'s entrancing melodic beats and BOSS's soft and slower rapping.

The next track is called My Loves Town and it's exactly as it says. Boss loves Sapporo. This song has a very soft, but old school hip hop beat to it. His love is very evident with the line " "welcome back" i smile and say "good to be back" MY LOVE TOWN/ DOWN TO LOVE TOWN"

Track 7 is called THA NORTH FACE and it is by far the deepest song in terms of lyrical content especially when BOSS says "BACK IN THE DAYS/'97/serving meals to my customers but I was always hungry. Thanks to friends who didn't ditch me. We were bluffing our best. Nobody had any expectations from the unnoted north. This is how I wanted to be so I don't feel any pain. I don't conform. Took or taken said or not said it's what has fed me these past 15 years"

The next song UNFORGIVEN talks about how the Japanese music business is a very unforgiving place and how one day you're on top and the next day you're not. A perfect example of this is the line "3,000 album sales make it a hit. What a miserable scene it has turned into, not like 15 years ago"

The next song is called LOST IN MUSIC BUSINESS and it's very much like RAGING BULL and it's entirely about how the music executives are greedy and don't care about the musicians or the music they make. Exactly why BOSS started THA BLUE HERB RECORDINGS. The next song GET READY is an extremely deep account of life in 1945 during World War II which very few people in Japan remember these days or will acknowledge, the past is the past after all.

Track 11 is called Stand on the Word and it's a very almost militant track that starts off saying "I'm not your typical Japanese" It's clear from the lyrics that this song is about standing up for what you believe in and being true to yourself.

The final track is called RIGHT ON and it's the longest song on the album at roughly 8 minutes long. It starts off with a very upbeat, but deep instrumental, a trademark of O.N.O. as a producer, but once BOSS starts there are periods where it picks up a lot and becomes a very uplifting song and you can feel the emotion pouring out of BOSS as he raps about things he wanted to do but never got the chance and things he wants to do in the future and the beginning of PHASE 4. RIGHT ON has one key subject and that is DON'T STOP! No matter how much life gets you down and people put you down, just get right back up and keep going. I especially love when Boss says "I hear FUCK YOU'S from somewhere far away. I'll just give them a FUCK YOU TOO"

TOTAL has been five years in the making and it shows. It's a very well polished album with the sound you've come to expect from TBH, but with a few new twists to show that they are ever evolving. BOSS has had a lot of time to reflect on his 40 years on the earth and the lyrical content shows. TOTAL is exactly that. Complete. TOTAL could very well be their best album ever or at least equal to the rest of their extensive catalog of real hip hop from the streets of Sapporo.

A little note for people who don't know the group. All of their music is mostly in Japanese, but the physical copies of their music feature translated lyrics. Their website also has an english section wtih links to lyrics, audio samples and interviews. http://www.tbhr.co.jp

4.5/5 A Definite Buy. The only disappointment is that their latest single STILL RAINING, STILL WINNING/HEADS UP is not on the album, but it was a limited release so I guess that makes sense, just a little disappointing for fans though I would think. That is the only reason I could see this not getting a 5.