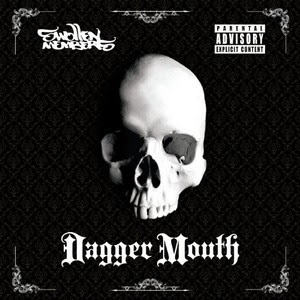 By Alex Dwyer from http://www.hiphopdx.com

Over the last dozen years, Swollen Members perfected a brand of abstract rap disturbia. Two classics, two flops, and one comeback later, the MCs from the darker side of Northwestern America, have more explaining to do. 2009‘s move to Suburban Noize Records saw the end of S&M’s Battleaxe Records. What followed was an absolute howler of an album called Armed To The Teeth. If Black Magic was the apology album for the shameless stab at commercial success of 2003‘s Heavy, Dagger Mouth is the explanation album to the outright embarrassment of Armed To The Teeth.

A hefty amount of Dagger Mouth’s burden falls on the shoulder’s of the Misguided Angel, Mad Child. The Rocksteady Crew affiliate candidly admits to a multi-million dollar opiate dependency in each of the album’s 16 tracks. “Thought I wanted to be king so I wore a crown/ started from the bottom, built an empire and tore it down,” he confesses on the Transformer-themed “Fresh Air.”

Mad Child, is somber, regretful and, at times, completely unconvinced about his own recovery. “The Shining,” opens with, “I’m feeling like I wanna die,” before he goes on to qualify himself as an addict through “heroin and tin foil” plain speak. Prevail seems lost in certain instances. During his verse on “The Shining,” Prev 1’s joke lines feel jarring, “I’m classic Old Spice/ you are Spice Girl scary.” Still, this palpable paranoia and train-of-thought lunacy lay nicely together as contraries within the album’s trademark Swollen sound.

Handling Dagger Mouth’s entire production, the group’s longtime tour DJ Rob The Viking, revisits the Vancouver chamber drums and chords that extract the best of both MCs. Along with the almost-kitschy “Fresh Air” instrumental, Rob gains experimental wins with the drip-drop single “Mr. Impossible,” and the pudgy pendulum rhythm on “The Predator.” Rob takes the right kind of risks on the lengthy, “White Python/Black Tarantula/Sound of the Drum.” The beat evolution and shifting thought patterns of each MC heighten the nuanced track as a standout. “Fire” hints at the circus pace that kicked Black Magic into another gear, but that never feels possible during this release.

Label mate and fellow comeback architect Saigon features on the album finale, another version of Giddy’s “Bring Me Down.” Mad Child concludes, “Sharpen up my axe/ and I am back/ I’m here to sever heads/ compulsive obsessive, I’m also aggressive/ my mouth is the message, my life is a lesson, my pulse is a blessing.”

Dagger Mouth is about pain. It’s an admission of guilt, a therapy session, and a shred of light on one of rap’s darkest group’s darkest moments. And it is, without a doubt, an explanation