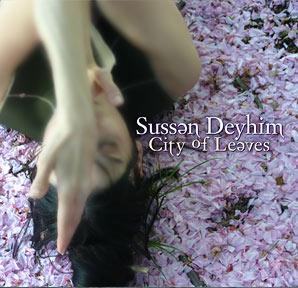 By Steve Hochman  from http://www.spinne.com

Sussan Deyhim's bracing new album, 'City of Leaves,' is an amalgamation of all the vibrant phases of her life: her upbringing and musical training in an Iran that shifted from wide cultural embrace to closed and repressive. More than 27 years in the challenging art laboratory that is Manhattan. And recently from a vantage in the hills overlooking Los Angeles' San Fernando Valley.

Don't laugh at the latter. Deyhim was skeptical when she and her partner, composer-musician-producer Richard Horowitz, moved there a few years ago. But she feels quite differently now.

"You hear so much of the Valley," she says, recounting the dismissive attitudes she had absorbed. "'Is this the Valley? Is this the end of our lives?' But it's wonderful. Access to so much. Not trendy. Multicultural. Armenian and Iranian and Chinese and Japanese restaurants. I don't mind it at all!"

But then, like her once-restrictive perceptions of the Valley, Deyhim has found that views of her and her ambitious music have been opening up of late.

"There's been a lot of great response from the world music scene," she says of reaction to her recent work. "This is very interesting for me to be able to feel, 'OK, maybe we can have a truce now, 30 years after.'"

The tussle she's implying here was a two-way battle: Her interest in experiments involving elements of jazz, avant-garde, electronics and such have long made music traditionalists wary of her.

"A lot of people are interested in traditional music, and I can't criticize them," she says. "But some of those people run the scene and try to determine everyone else's criteria."

At the same time, she spent a lot of time consciously sidestepping associations with anything that might be considered "world music" – a term she considered "condescending" and meaning in usage "the-rest-of-the-world music."

"It's becoming a lot more interesting criteria than it used to be." she says of the ever-loosening category.

And with that, she's felt comfortable and confident enough to release an album that embraces the full range of her talents and interests – and that's a wide range, evidenced by the fact that in conversation she references John Cage, Karlheinz Stockhausen, Morton Subotnick, Miles Davis, Jackson Pollock and John Coltrane in describing her sensibilities as readily as she discusses such Iranian singers as Parisa and Sima Bina. 'City of Leaves' showcases Deyhim's avant-garde, jazz and Persian classical vocal techniques alike, with contributors ranging from Turkish ney virtuoso Kudsi Enguner to experimental fusionist Bill Laswell to New York electronics-turntable-atmospherics innovator DJ Spooky – disparate on paper but unified in sound by Deyhim's artistic vision and talents.

In that regard, the title song and album opener is a perfect tone-setter.