Sissy - March Of The Humans 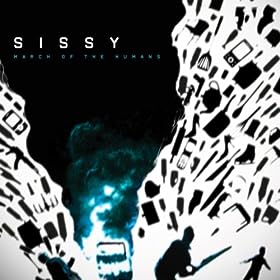 By Ben Rayner from http://www.toronto.com

Sissy hails from Toronto and already has one superb album under its belt that received international release on a high-profile U.K. electronic label, yet the mysterious downtempo duo is virtually unknown in its hometown.

To be fair, of course, Sissy is hardly a household name anywhere — which seems a touch unfair, since All Under, its 2006 debut for Global Underground Recordings, was an out-of-the-blue stunner that not nearly enough people got to hear. The stars might be finally be poised to align in David Trusz and Johanne Williams's favour, however, since their excruciatingly long-in-the-making second LP is even stronger. If this one gets out to the right audiencesAll Under, it's going to be very tough to ignore.

Fair warning, though: March of the Humans is even grimmer than its predecessor. Coal-black. Mirthless. All Under wallowed elegantly in loneliness and disenchantment while copping a few choice moves from '90s “trip-hop” but M.O.T.H. is colder, more industrial and far more pessimistic. “It's all a waste/ It's always a waste/ It's all gonna be a waste,” Williams intones in a clenched monotone on “All a Waste.” “Show me something that you've done right now that's worth believing in,” goes the bridge to “Long Distance,” one of two tracks that perversely enlist a children's choir for a breathtakingly bleak chorus. Sissy makes it quite clear where it thinks this march is going.

Between Williams's forlornly beautiful voice and Trusz's arresting production, mind you, a spiral into oblivion has rarely sounded this spectacular. Sissy demonstrated on All Under that it could do dubbed-out wee-hours crooning as well as any of the crews from Bristol whose influences it proudly wore. M.O.T.H., however, brings a harder electro edge and more rousing tempos to the table — “Imminent Rampage” even proffers a mid-album eruption of driving tech-step drum-‘n'-bass — and is a less draining listen because of it. It appears that dancing at the end of the world comes as naturally to Sissy as long, dark nights of the soul. Here, Toronto, is your first great album of 2012.