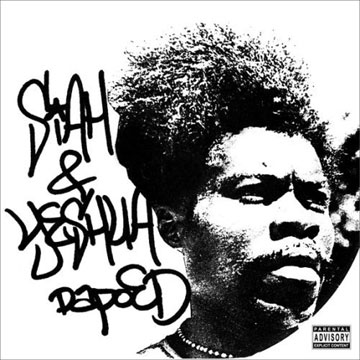 Review
"Glory Be. Fondle 'Em do it again. Wide funk vibes and Birdland dwarfisms mixed up with inspiried verbiage... for full-on, beat- switching story-telling, check the 11-minute epic, 'A Day Like Any Other.' Bliss." -- Muzik (Vital Release) --Muzik
Review
"Siah & Yeshua have heated up the Hip Hop crucible with an ambitious and creative EP... the chemistry between the two MCs flow like liquid lightning, especially on 'A Day Like Any Other', their 11 minute tour de force of verbal tag-teaming. As well, [they] whip up jazzy brews on the musical tip, drawing from influences as far and wide as Igor Stravinsky, Herbie Mann and Quincy Jones... a rarely-heard, amazing effort that quenches the creative thirst of both mind and ear. Siah & Yeshua represent the fullest, underground Hip Hop at its height of cutting-edge creativity." -- O-Dub, URB (The Next 100) --Urb
Review
"If you are into Hip Hop that borders on the cutting edge musically, then you'll definitely want to check for [this]. Standout joints include the 11-minute beat excursion "A Day Like Any Other", "The Visualz" and "No Soles' Dopest Opus." This record is definitely not for the one-dimensional fan of Hip Hop." -- Beni B, (The Vinyl Exchange) --The Vinyl Exchange
Product Description
Siah and Yeshua Dapo ED... A name that brings back memories of a time when independent Hip Hop was at its zenith. They released their 1996 debut vinyl-only EP "The Visualz" on Bobbito Garcia's famous record label Fondle 'Em Records. The EP featured rapping from the group's two MCs, production from Jon Adler, and a guest appearance by Ken Bugaloo. The group's song "The Cure for Stagnation" appeared on the 1998 compilation album "Deeper Concentration." "A Day Like No Other", a remix of the group's song "A Day Like Any Other", was released on Mary Joy Records in 1998 and featured Yeshua Dapo ED, Murs, EL-P, and Shing02 freestyling over beats from the original song. Siah and Yesh also went on to record various solo tracks. Now, for the first time in its entirity, the group's collective work is available on CD. This deluxe package contains liner notes from Bobbito and Siah plus rare never before seen photography, artwork and live show flyers. Also special bonus material: MP3 instrumentals of the first 6 tracks, and live freestyle MP3's. A true collector's item!
permalink
Partager cet article