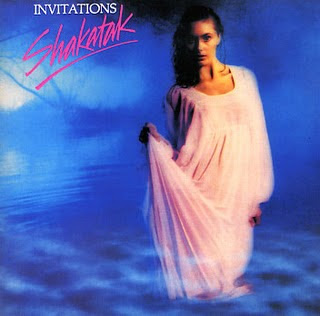 
By Mike Stone (Notorious) from http://mikestonemusic.blogspot.com

The album cover may look sort of spooky & mysterious (Gives me the creeps, sometimes, but what a great-looking model), but as the saying goes, you can never judge a book by its cover. This 1982 Polydor/PolyGram release by Shakatak was one of the group's best R&B/Jazz recordings at that time.

Most of you may remember the songs, "Lose Myself", and "Lonely Afternoon", which features the sultry, sexy vocals of Tracie Ackerman (some thought it was Jill Saward singing on the track, but she is with the group at this time of recording). They are the actual tracks on this album, so you can stop worrying about this album being another fabrication of "Night Birds" replacing the actual song that was supposed to be there. In fact, "Night Birds & "Invitations" did come out the same year in 1982. That's primarily the reason why some Shakatak fans felt confused on what year these two albums came out(?).