Ruby Velle & The Soulphonics - It's About Time 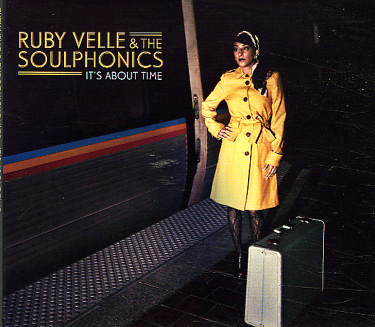 From http://rubyvelleandthesoulphonics.com
“It’s About Time,” the full-length debut album from Atlanta’s Ruby Velle & The Soulphonics, has quickly made waves around the globe since its recent September 2012 release.

In the US, the lead off single “My Dear” was featured as iTunes’ “single of the week”, sparking a digital soul-grab of 200,000 single downloads, and 1200 full album download sales, landing the album at #4 on the iTunes R&B charts. The same week, Jim Farber of The New York Daily News named the album in his much  sought-after top ten. Inaddition, Google Play is offering“MyDear” as a free track for the month of October for all its smartphone users.

In Europe, bloggers have posted a number of ecstatic reviews–finally having a Soulphonics full-length on their decks after the band’s former EU teaser-singles, most notably a 2010 inclusion of the single “Heartlite” on a compilation album by the UK’s Acid Jazz Records. Respond- ing to this rising buzz across the pond, a spring Europe tour is in the works, with the band’s avails there centering in April.

Ruby Velle & The Soulphonics roots are embedded in the rich sound and history of Georgia soul, beginning with the early 50’s and 60’s R&B that became so well known around the world. Having performed countless gigs since 2005, and with a slew of 45rpm singles already under their belts, the band has already contributed heavily to the steadily increasing awareness of genuine rhythm and blues music that exists today. They pack clubs and festivals with their original brand of soul, all of which is written and recorded in Atlanta. Ruby Velle & The Soulphonics are taking it world wide in 2012, with the release of “It’s About Time.”