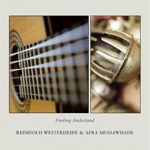 Reinhold Westerheide (1958) studied the guitar (with Antonio Pereira Arias) and percussion at the Royal Conservatory The Hague, graduating as a performer on both. More than that he took masterclasses with Abel Carlevaro, AlbertoPonce, Hubert Käppel and Leo Brouwer (guitar) and Leigh H. Stevens and Michiko Maekane (marimba). He has since been active on sevral musical fronts. As a member of the Circle Percussion Ensemble he performed with the Nederlands Dance Theatre on tours in Europe, Indonesia and Japan, where he played with the Kodo percussion group. Prominent Dutch and foreign composers have dedicated works to Reinhold Westerheide, many of which he has recorded on CD. Apart from performing as a soloist, he specializes as a song accompanist and plays in several smaller ensembles. Westerheide is also a composer, writing for his own instrument and for orchestra, chamber music as well as music for films and the theatre. His great versatility enables him to collaborate in multimedia projects and in dance, litarary and film production. Reinhold Westerheide lives and works in Utrecht, the Netherlands and Bielefeld, Germany.
permalink