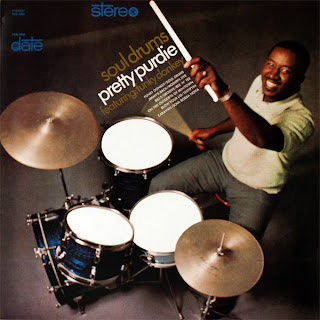 At an early age Purdie began hitting cans with sticks and learned the elements of drumming techniques from overhearing lessons being given by Leonard Heywood. He later took lessons from Heywood and played in Heywood's big band. Purdie's other influences at that time were Papa Jo Jones, Buddy Rich, Gene Krupa, Joe Marshall and Art Blakey.

In 1961 he moved from his home town of Elkton, Maryland, to New York. There he played sessions with Mickey and Sylvia and regularly visited the Turf Club on 50th and Broadway, where musicians, agents, and promoters met and touted for business. It was during this period that he played for the saxophonist Buddy Lucas, who nicknamed him 'Mississippi Bigfoot'. Eventually Barney Richmond contracted him to play session work. In the same year original Beatles drummer Pete Best and guitarist Tony Sheridan recorded tracks in Hamburg with the Beatles. Later Bernard Purdie added drum overdubs to tracks from these sessions,including "Ain't She Sweet", "Take Out Some Insurance on Me Baby" and "Sweet Georgia Brown". The main reason for this was to give them a punchier sound for the US market. These tracks were eventually released on January 31, 1964 by Polydor. Ringo Starr's physical approach to drumming was probably influenced by Purdie's Motown style.

Purdie was contracted by arranger Sammy Lowe to play a session with James Brown in 1965 and recording session records also show that Purdie played on "Ain't That A Groove" at the same session. This was one of several sessions he played with Brown and the track "Kansas City" from Brown's album Cold Sweat (1967), displays one of the most sophisticated and driving shuffles recorded for Brown's catalogue. Purdie is also credited on the albums Say It Loud-I'm Black and I'm Proud (1969) and Get on the Good Foot (1972) on which "Ain't That A Groove" appeared.

Purdie started working with Aretha Franklin as musical director in 1970 and held that position for five years, as well as drumming for Franklin's opening act, King Curtis and The King Pins. In 1970 he performed with both bands at the Fillmore West; the resulting live recordings were released as Aretha Live at the Fillmore West (1971) and King Curtis's Live at Fillmore West (1971). His best known track with Franklin was "Rock Steady", on which he played what he described as "a funky and low down beat". Of his time with Franklin he once commented that "backing her was like floating in seventh heaven".