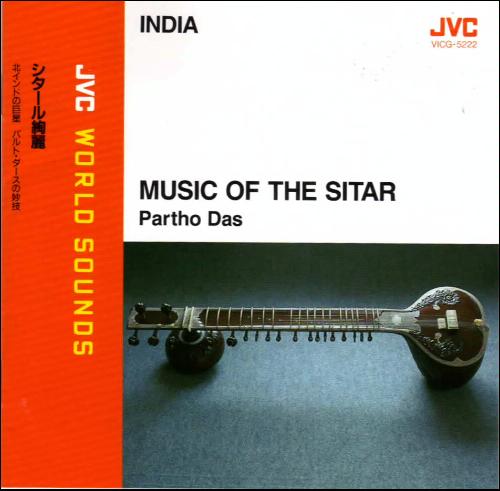 By Alex Henderson, All Music Guide

In world music, some instruments are so distinctive that hearing only a few notes brings to mind a particular country and a particular culture. No instrument is more identified with Japan than the koto (even though the koto was actually invented in China and brought to Japan by the Chinese), and just as no wind instrument evokes thoughts of Scotland more quickly than Celtic bagpipes, no string instrument says "India" more than the sitar. It's hardly India's only important string instrument -- even those with only a casual interest in traditional Indian music should know about the vina, the sarod, the sarangi, and the surbahar -- but it's certainly among the country's most recognizable. One of North India's excellent sitarists is Partho Das, whose Music of the Sitar was recorded in Delhi in June 1989. This album finds him playing three instrumental North India-style ragas; the shortest is the eight-minute "Dhun in Raga Bhairavi," while "Raga Bageshri" lasts 30 minutes, and the equally hypnotic "Raga Yaman" lasts 28 minutes. Such extended performances aren't for those with short attention spans, but because Das is such a master of his instrument, he has no problem holding the attention of serious sitar enthusiasts. Das is joined by tabla drummer Rashid Mustafa on this excellent CD.