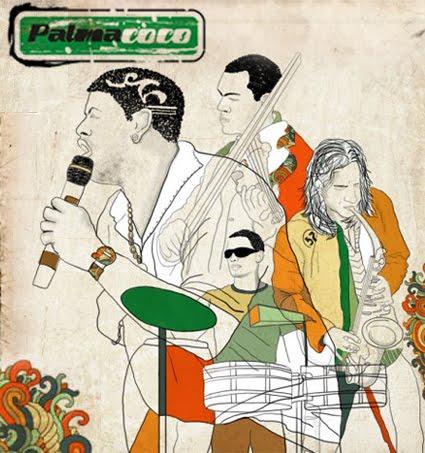 PalmaCoco, is a Latin music group, created by producer Sr.Ortegon Cali. His musical style is what they call the "BoogaFlow" (mix of  60´s latin boogaloo and urban music).

The idea of merging the old school salsa, theboogaloo, the shing-a-ling, mambo, with urban music, was born in Paris  nearly 10 years with the DJ "Fercho the Bacan" and the artistic director of Boogaloo Concept, Stan Galou.  This was because the rhythm pattern has always been an obsession the Sr.Ortegon,  and he belives that the latin Boogaloo, despite its short lifetime,  was very important for the Latin music industry in the U.S. ( Watussi eg), which managed to dance to the non-Latinos of the time and besides, it was the first authentic musical expression of the Latino born in NY.

After several experiments with French rappers and dj, this fusion was just giving light to what would be the BoogaFlow, which was given its present form in Bogota in 2008. Sr.Ortegon met the reggae singer and MC: Pana Black after a concert in San Andres iland and with the producer John Celis, made the first PalmaCoco format.

Back then, in his show, Sr.Ortegon played BoogaFlow mixing electronica music with Salsa, Bomba, Plena and Cumbia.

Gradually PalmaCoco was molding into the BoogaFlow show, because the public was more receptive at this as well as the electronic music apart.