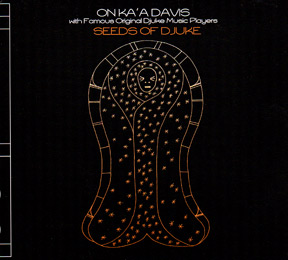 An incessant pulse runs through the African diaspora; it’s the beat that tears the roof off the cerebral avant garde. Classically trained experimental guitarist On Ka’a Davis discovered it while squatting in the once derelict tenements of the Lower East Side. Davis and his Famous Original Djuke Music Players take this pulse on Seeds of Djuke (LiveWired Music; released April 21, 2009) and retrace the long-lost taproot of a future music.

“The very first time I saw Sun Ra and his Arkestra was in Central Park,” Davis recalls. “They walked through the crowds, passing right by me. They were all wearing Egyptian make-up on their faces and I thought, ‘This is the Blackest band I have ever seen in my life. This is Deep Nubian music.’” Two years after this revelation, Davis was playing in the Arkestra himself, living in the communal setting in Philadelphia that was the social basis for Sun Ra’s group.

Davis traveled far to reach deep: from the R&B and prog rock grooves of his childhood home in Cleveland to the rigorous classical guitar training at Vienna’s Hochschule für Darstellende Kunst, to the rollicking Roma riffs of the Austrian streets. There, he saw the ripple effect of jazz in a whole new light, discovering the bebop solos of Charlie Parker, the European classical gestures of Keith Jarrett, the worldly improvisation of John McLaughlin. Busking alongside Roma musicians for pocket money, Davis experienced the “subset culture” of gypsy life, a world that caused him to reflect on his own complex African American heritage.

Davis eventually wound up on New York’s Lower East Side, where he played for punks in the squatter revolution that transformed the neighborhood in the 1980s. The squatters’ battle to reclaim the derelict shells of Lower Manhattan had its sonic side, with a groundbreaking (and regulation-defining) micro-broadcasting radio station and infamous shows in myriad basements. It was in the squat that the outlines of what Davis calls djuke emerged, a music that draws on everything from Afrobeat sensibilities to Spanish classical guitar to space culture.

“The first idea for my music came out of basement rehearsing,” says Davis. “Our building on 13th Street hosted a lot of ‘Squat or Rot’ parties, and all the punks would come. That was the first beginnings of the music, and ‘I Stayed Cool,’ for example, is an original tune, a Malian blues kind of thing, that survived from my band rehearsals in the squat. Some of the point of view I express in my music has been tempered by my experience of being in a squat, by my need to express socially conscious ideals.”

As a musical squatter, Davis bivouacked wherever he went, but with djuke, he found an essence beyond genre, the Deep Blackness that united Sun Ra’s remapping of ancient Egyptian culture and cosmic interpretation of Dogon legends of African space travel with Fela’s defiant poetics and rhythmic discipline.

It powers Davis’ perception of pulse-beat, a call to movement and rhythm that defies genre while defining it. “People learn to identify the beat of a music by genre, by namesake, a reggae nyabinghi beat, or a mambo, or a rock beat,” Davis explains. “The idea of pulse-beat goes beyond that. It gives me the opportunity to create dance rhythms based on pulsations and the freedom to work with rhythms that are overlapping, elliptic rhythms if you will, with 3 over 5.” The many shades of the pulse-beat shine on “Yea Yea!” and “No! No Go For It!” — setting  what Davis calls the “rhythmic cornerstones” of djuke.

Rhythm, for Davis, is about more than percussion; it is rooted in traditions like the “two-guitar” approach in R & B, when the guitars have a rhythmic as well as a melodic mission. This approach dominates tracks like “Voodoo Ultralux,” where rhythmic parts combine in a fugue that “flows in and out like ocean waves.”

Deep Blackness inspires Davis’ quirky use of English, a personal pidgin and shout-out to Fela’s linguistic medium and message. "By altering the language, I can make it fit phrasing and rhythmic schemes differently,” Davis notes. “That’s one thing I noticed about Fela's music. The language itself presupposes the rhythmic values of the music. You cannot get the same things in straight English that you get with a patois.”

The power of patois is in full force on “Ain’t Nobody Teach Nobody Nothin’!” where the message has been transformed into a rhythmic statement that throws meaning in a new light. “I wanted to bend it a certain way to force people to relate to the music divorced from any ownership of a high-brow identity,” Davis explains, “where everything is neatly said and nicely said and well understood. I wanted people to have to think about what the words mean."

Deep Blackness is also why Davis adopts a more theatrical stage persona, inspired more by Hendrix or P-Funk than by the tennis shoes and black jeans of the New York experimental music scene. “Les Paul, in his first efforts, took his electric guitar to a club to demonstrate. It was a block of wood with a guitar neck attached. Nobody was interested. They laughed at it,” Davis recounts. “He realized if it looked more like a guitar, people would accept it better. So he built his next model with the outside shape of a guitar. He realized that people see the music first before they hear it.”

Music’s impact on the eyes brought to mind the flamboyance that African American musicians had long employed to heighten their musical presence, a physicality often missing from the musical avant-garde. “Having a style, a personality on stage has always been a tradition in Black music. It’s always been that either you dressed up looking sharp or you had some kind of atmosphere you create with your look. I’d like to re-identify with that. It would help the music a lot.”

Reuniting body and soul with the fringe of sonic possibility lies at the heart of djuke, and Davis is building a new music with Seeds of Djuke, drafting “blueprints for future designs in the music, whether it be harmonic or rhythmic schemes or both.” It brings the beat back to free jazz, getting listeners out on the dance floor. It creates avant-garde music that makes you “pat your foot, snap your fingers,” Davis laughs, “makes you jump and dance around.”

“Jazz music is the ability to integrate music and dance,” Davis muses. “Charlie Parker recognized that. If I am using elements of the abstract, then the music has to be centered in the round.”