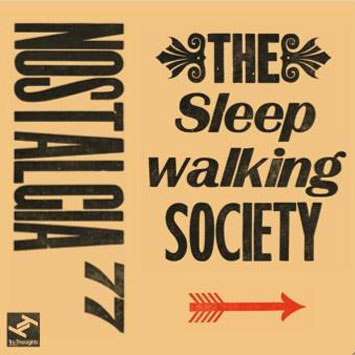 By Colin Buttimer   from http://www.bbc.co.uk

Nostalgia 77 is the working name of Benedic Lamdin, a prolific producer who's produced 11 albums in a variety of guises since 2004. His music encompasses everything from sample-based compositions to collaborations with real, live musicians of the calibre of Keith and Julie Tippett, amongst others. The Sleepwalking Society, the fourth Nostalgia 77 album, very much falls into the latter category, this time placing the German singer Josa Peit centre-stage.

Strings introduce Cherry and then pause to reveal plucked acoustic guitar and Peit's clear-toned lament before picking up the melody and carrying the song through to its end. The tonal colour of the entire album is a sepia-edged cyan: encompassing as it does a reflective range of jazz and folk-inflected blues that explores the uncertainty of life and the hurt of failed relationships. The Sleepwalking Society ends with Hush, an almost nine-minute threnody that wistfully sounds out one last aftermath at a stately pace.

Throughout the album, Lamdin's production offers a sense of clarity and understated confidence. The sound distantly connects to 4hero's later work in its exploration of new-found acoustic song-form developing out of a background of programmed beats. Married to that is a clear focus on percussion and its priority in the mix. Although actually released on Tru Thoughts Records, The Sleepwalking Society could also have found a comfortable home on Germany's Compost Records alongside the likes of Clara Hill, Koop and Micatone.