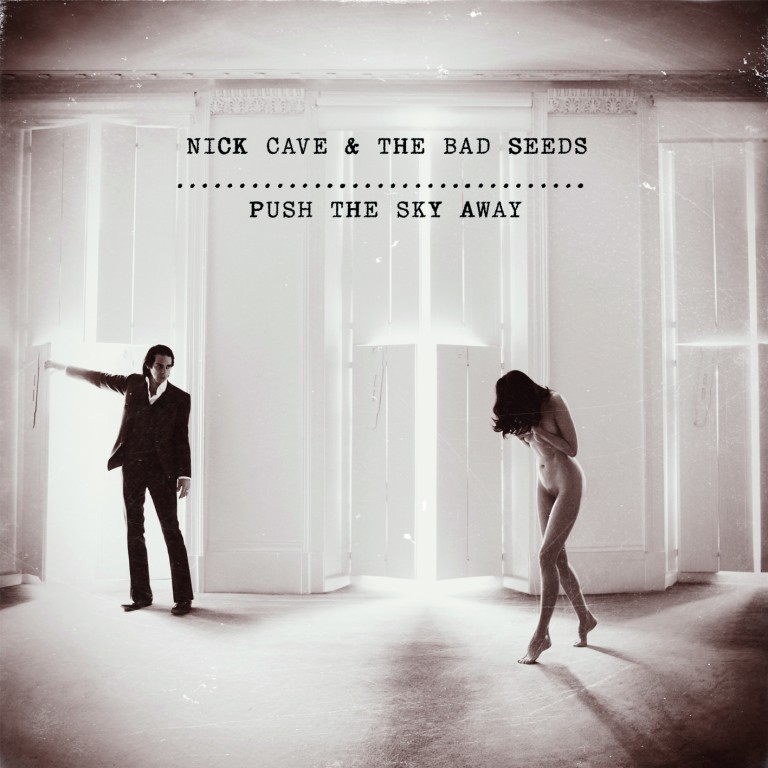 Nick Cave & the Bad Seeds release their fifteenth studio album PUSH THE SKY AWAY on 18 February 2013 “Well, if I were to use that threadbare metaphor of albums being like children, then Push The Sky Away is the ghost-baby in the incubator and Warren’s loops are its tiny, trembling heart-beat.” Nick Cave At the heart of Push the Sky Away is a naturalism and warmth that makes it the most subtly beautiful of all the Bad Seeds albums. The contemporary settings of myths, and the cultural references that have time-stamped Nick’s songs of the twenty-first century mist lightly through details drawn from the life he observed around his seaside home, through the tall windows on the album’s mysterious and ambiguous cover. The songs on this album took form in a modest notebook with shellac covers over the course of almost a year. The notebook is a treasured analogue artefact but the internet is equally important to Nick: Googling curiosities, being entranced by exotic Wikipedia entries “whether they’re true or not”. These songs convey how on the internet profoundly significant events, momentary fads and mystically-tinged absurdities sit side-by-side and question how we might recognise and assign weight to what’s genuinely important. Push the Sky Away was produced by Nick Launay and recorded at La Fabrique, a recording studio based in a 19th Century mansion in the South of France, where the walls of the main studio are lined with an immense collection of classical vinyl. “I enter the studio with a handful of ideas, unformed and pupal; it’s the Bad Seeds that transform them into things of wonder. Ask anyone who has seen them at work. They are unlike any other band on earth for pure, instinctive inventiveness.” Nick Cave On this album it’s not always apparent what instruments the band is playing: they may be traditional musical instruments but other sounds are clearly generated by objects unrelated to musical instruments. What’s being created is a collective musical language that’s rich and complex. Push the Sky Away has a clarity and sweet strangeness that’s built upon the refusal to accept limitations, whether they be the traditional uses and sounds of musical instruments, lyric styles, or diminished spiritual horizons. “I don’t know, this record just seems new, you know, but new in an old school kind of way” Nick Cave.Source