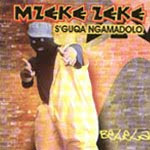 
Mzekezeke is one of the most popular young music artists in the genre of Kwaito, predominant in South Africa. Mzekezeke, whose real name is Zakhele, was born in Tembisa into a family of six children. From a young age, Mzekezeke longed to be a kwaito musical icon, so he dropped out of school early to pursue his dreams. For some time, he only faced rejection by music producers until he approached DJ Sbu, who helped him spread his music through the radio.

Mzekezeke won both Artist of the Year and Song of the year at the South African Music Awards(SAMA) in 2003. His recordings include S'guga Ngamadolo (2003)and Storotoro (2002). One of Mzekezeke's most well-known songs is Ubani Umzekezeke. Another one of his hits, S'guqa Ngamadolo ("Bend Down On Your Knees") portrays how some kwaito music has become synonymous with the white society in South African, since the song is often played during matches at national sporting events like cricket and rugby (often viewed as white sports). Mzekezeke has been seen with different political figures like at the 2003 Freedom Day celebration where President Thabo Mbeki joined Mzekezeke on stage. This was a significant event because it showed how kwaito is beginning to be recognized at a larger level as something beyond just the youth in South Africa. He continues to deliver messages of hope and humility, as well as questioning authority.

Since his release date Mzekezeke has succesfully sold more than 100 000 copies. Mzekezeke has been nominated for the Artist of the Year and Song of the year for the SAMA Awards of 2003. He won both awards.
S'guqa Ngamadolo in stores!!!

MZEKEZEKE IS MAKING A COMEBACK

Just last night, I was complaining to my other half that the once-exciting kwaito industry is now staid and boring, so much so that a Namibian artist won the Best Kwaito category at the 2007 Channel O Music Awards.

But Lo and behold, the gimmicky knight in shining armour, Mzekezeke aka Mzakes Man, has just ordered another set of bright Dickies overalls from his neighbourhood tailor, which can only mean one thing: he is finally making his long overdue comeback. The masked one, who broke box office records with kasi bangers such as “S’guqa Ngamadolo”, “Akekh’Ugogo” and “AmaBEE”, will be unleashing his crazy antics at the launch of Ekurhuleni’s 2010 Business Plan on March 8, 2008.

The big fan park at Germiston will feature Premier Soccer League teams Kaizer Chiefs and Free State Stars. That game will be watched live by soccer lovers and before the game begins, fans will get a chance of mingling with Mzekezeke and other stars like Nhlanhla Nciza, Lira, Skwatta Kamp, Pro, Kabelo and Arthur from around 10am.

I can’t blame the savvy proprietors of TS Records, Sbu Leope and TK Nciza, for encouraging Mzakes to make a comeback as record sales have been drier than usual at their famed stable since the departure of Ntando and Brown Dash.