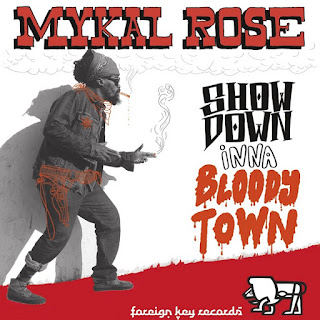 For over 25 years, Michael Rose has been recording and performing his brand of militant, hardcore Jamaican music to the delight of reggae fans around the world. As a solo artist & with Black Uhuru, "Ruff" Rose has achieved great success throughout his career, even as different Jamaican musical styles have phased in and out of popularity. Perhaps the highest profile recognition came in 1984, when Michael Rose and the other Black Uhuru members (Duckie Simpson, Puma Jones, Sly Dunbar, and Robbie Shakespeare) won reggae's first Grammy award for the album, Anthem. With lead singer Michael Rose seemingly at the top of his game, he parted ways with Black Uhuru, with the intention of redefining his musical direction as a solo artist. A slew of solo albums followed. In 2013 Mykal has teamed up with Bay Area producer Siahvash Dowlatshahi to release the EP "Showdown Inna Bloody Town". The album represents new musical directions for Rose, featuring the single "Gunfighter", which has an Ethiopian Jazz flavor in the style of Mulatu Astatke. Other tracks such as "Dutty Road" maintain Rose's classic mash down babylon style. With over 25 years in the music game, Mykal Rose continues to innovate by leading the way in new sounds of Jamaican Roots Music. Source