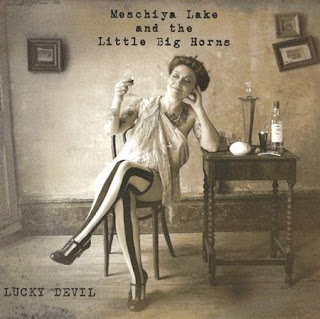 For the past few years, on any given day, tourists and residents walking on Frenchmen or Royal streets would have been treated to the throaty warble of Meschiya Lake floating atop a cornet, trombone or sousaphone. This year?

"I can't even get a spot on the street anymore," Lake says, laughing. Not that she's complaining. "I don't want to wake up at three in the morning to get a spot. I have."

As the gigantic voice of the ubiquitous New York City/New Orleans jazz collective Loose Marbles, Lake, 30, was as much a downtown fixture as Grandpa Elliott or Mr. Okra — a distinctive star belting out Depression-era standards, surrounded by a crescent of ratchet-tight string, brass and rhythm players. Writer Dan Baum profiled the group in a glowing New Yorker piece in May 2007, but a potentially greater honor came that summer, on its annual pilgrimage to Manhattan's Washington Square Park. "That was our office," Lake says. "We got voted by the drug dealers as the best band in the park. That was a very momentous occasion for us. They're listening to it all the time."

Now, with her spin-off band the Little Big Horns, Lake is stoking the embers of another extinguished tradition: the social dance and floor show. Every Monday at Mimi's in the Marigny, the Little Big Horns turn back the clock, reanimating Jelly Roll Morton, Bessie Smith and Duke Ellington as some of the city's best swing dancers instruct left-footed locals on the twists and twirls of the Charleston and Lindy Hop.

"We're all friends," Lake says. "They come to the Spotted Cat (on Tuesdays), too — pretty much every gig we have. Which makes the energy of it incredible. When they're not there, I miss them."

For the release of the Little Big Horns' self-issued debut, Lucky Devil, Lake and a clutch of dancers (including NOLA Jitterbugs' Chance Bushman and Amy Johnson and Fleur de Tease's Trixie Minx and Alley Oops) are transforming the pit at One Eyed Jacks into their own personal ballroom. "Old-timey entertainment," Lake says. "Three sets, four performers. The last one's going to have two, for the grand finale. Between the performances people are going to strut their stuff on the dance floor. One Eyed Jacks is the perfect place for it."

Captured during two sessions in December and January at Tatiana Clay's historic 511 Royal St. residence, Lucky Devil contains a mix of Lake's treasured classics and two originals, the swinging "Do For Myself" and Spanish-tinged "Slowburn," that hardly feel out of place. "Singing those songs for a living the last few years, you get to know the form of it," she says. "Once you know the form, you can apply it."

Lake, whose first weekly gig came at age 9, covering Patsy Cline and Tanya Tucker for country fans at the Elk Creek Steakhouse & Lounge in Piedmont, S.D., says it wasn't luck that led her to Jelly Roll Morton's childhood home at the corner of Frenchmen and North Robertson streets, where she's lived since February. Morton's "Sweet Substitute" is a Little Big Horns live staple and the ninth track on the LP.

"I would call it fate," she says. "My landlord is a man named Jack Stewart, who also plays in the New Leviathan Oriental Foxtrot Orchestra. He's owned it since 1976, as Section 8 housing. He got a grant from the historical society to renovate it and we moved in.

"He's excited that jazz musicians and dancers are in there," Lake adds. "He was super stoked that we even knew who Jelly Roll Morton was."