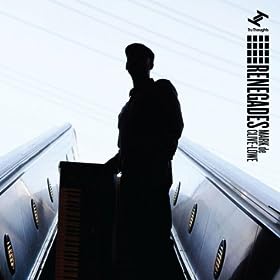 MdCL’s ninth solo long player under his own name, ‘Renegades’ finds the prolific producer and musician bridging a transition between two continents, and mining a rich seam of personal creativity and inspiration, having recently relocated to Los Angeles after ten years in London.

Alongside his own impeccable skills on beats, basslines, synths and more, the record features a cast of guest performers from both sides of the Atlantic, including vocalists nia andrews (Common, Janelle Monae), Tawiah (Warners) and Bembe Segue; percussionist extraordinaire Sheila E (Prince); bassist Pino Palladino (D’Angelo/The Who); strings virtuoso and Flying Lotus collaborator Miguel Atwood-Ferguson; drummers Lil’ John Roberts (US), with whom MdCL describes having a musical ‘telepathy’, and Richard Spaven (UK); guitarist to the stars Mike Feingold; and new label-mate Omar, the king of UK soul. Working with the cream of international musicians is something MdCL relishes: “Everyone that’s been brought in on this record is free to be themselves. I love hearing people come together and bring their own vibe to something.”

The overall sound of the album hinges on MdCL’s energetic, pristine production – club cuts flavoured with soul, funk, tech-Afrobeat and Latin twists topped with fine, organic songwriting;  all orchestrated by MdCL showcasing his ability to meld the science of beat-making with musicianship.  He sums up the approach: “My whole thing with this kind of production is balancing electronics and programming with organic and live musicianship. I love for that line to be blurred almost to the point where you don’t know which is which.”

Having long been a first-call collaborator for a wide range of artists, MdCL has lent his skills as producer, performer, composer and more, to over 250 records by Jill Scott, Jody Watley, Leon Ware (Marvin Gaye/Michael Jackson), Dame Shirley Bassey, Sandra St. Victor (The Family Stand/Chaka Khan), and a host of others. He recently collaborated on the “Fairplay” single by Zed Bias, which is all over BBC R1 and 1Xtra. Current extra-curricular projects include monthly LA residencies such as Church, a jazz night he runs at Angel’s in Santa Monica featuring surprise guests; Scored, in which he directs an improvised soundtrack project to classic films; and the house music party Body Rock, with Sole Channel’s Alix Alvarez and Nef Nunez. Studio projects include the Rotterdam Jazz Orchestra Big Band Project; album production for Sy Smith and Sandra St Victor; and collaborating on Jody Watley’s new LP. He is also going back to his roots, playing jazz piano for the celebrated Dwight Trible (former singer with Pharoah Sanders).