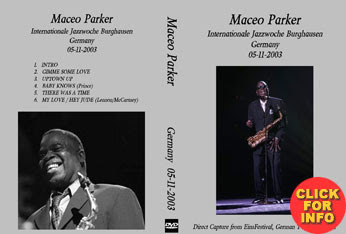 From Wikipedia :
Maceo Parker  (born February 14, 1943) is an American funk  and soul jazz saxophonist, best known for his work with James Brown in the 1960s, as well as Parliament-Funkadelic in the 1970s. Parker was a prominent soloist on many of Brown's hit recordings, and a key part of his band, playing alto, tenor and baritone saxophones. He is now just as well known for his own shows, as he has toured continuously under his own name since the early 1990s and has built up a strong fan base.

Tracklist :
Intro
Gimme Some Love
Uptown Up
Baby Knows
There Was a Time
My Love
Hey Jude