Little Axe - Bought for a Dollar, Sold for a Dime 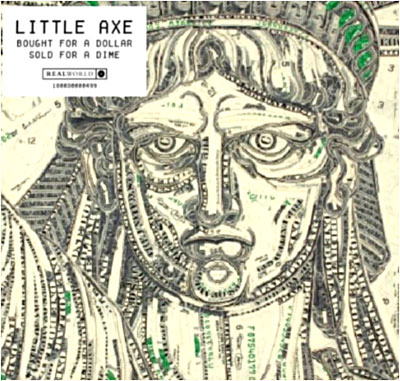 After nearly two decades of blues re-invention, singer/guitarist Skip McDonald has perfected his particular and peculiar metamorphosis of the form. Is Little Axe a band or an alternative name for McDonald himself? It's quite possibly both, as every live appearance possesses a very strong group vibration. McDonald now prefers the stance of grizzled bluesman from Dayton, Ohio, but his prime breakthrough came as a member of Sugar Hill Records’ in-house band, and had formed Tackhead by the time the mid-80s arrived.

Regardless of whether his assumed 'authenticity' is similar to that sought by born-again bluesman Keb' Mo', it's not really an issue when McDonald clearly embraces the form with authority, creativity and innovation. A massive part of the already massive Little Axe sound has always been provided by dub-king producer Adrian Sherwood, his influence so sonically pervasive that he counts as an equal collaborator. The old master-crew is assembled for these sessions in Peter Gabriel's Real World studio: bassist Doug Wimbish, drummer Keith LeBlanc and soaring singer Bernard Fowler. There are also two guest vocal spots from Jamaican veteran Ken Boothe. Less familiar, but still crucial to this album is harmonica player Alan Glen, whose stinging trills lift up nearly every song.

The feedback avenues are now beyond easy tracking, as old blues elements are channelled through fresh techniques. There are even versions of two Tackhead songs, further confusing the lineage between old-timey rural foot-clumping and shining 1980s funk-hop beats. There's a reading of the song popularised by long-departed down-home bluesman Son House: his Grinnin' In Your Face is shortened to Grinning.

The album opens and closes with 50-second mini-songs, their gospel traits swirling into the heavens. Most of the remaining bulk favours a much longer six-minute average within which to slink and saunter, emanating a spellbinding aura. The distinctive Little Axe sound is a dreamy miasma, creaming up elements of funk, rock, soul and gospel. It's perpetually intertwining into a genre weave. The vocal layers build up a call-and-response thickness, and a couple of tunes even hint at ska and reggae rhythms. The cumulative slowness begins to take on the feel of an imaginary Funkadelic ballad collection.

The guitars are always draped in exotic echo, held in perpetual slow motion, except for when Hammerhead gets to sludge-truckin' and Return proves itself the hardest and heaviest track. By this time, there's a beautifully sustained flotation in place.