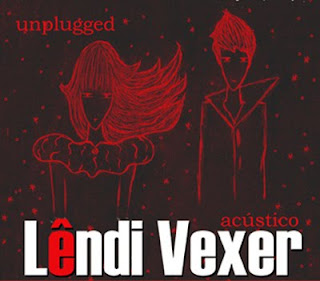 Lendi Vexer recorded its first promotional EP in its own studio in 2002 (self-produced CDR) called Suicidal Adage. Originally, it consisted of 4 tracks (Tribute to desolation, Scape, Nothing was special and Suicidal adage).
After deciding to upload it on the Internet for sale, the duo got in touch with people abroad and with an Australian independent label. They put them in contact with distributors and promoted the EP. Once the first 500 units were sold out, in 2004 the EP was relaunched with a bonus track in which Natalie plays the Theremin in real time. This EP will be re-edited by Stereotape Records. As DJ Tom Bollinger played it in Australian clubs, it was him, this great Australian collaborator, who made the first Remix version of the song Nothing was special.

As this material became known, on the web, the duo was asked for permission to make a second remix. Thus, in 2004, The Crimson Underground (UK-North Ireland) made the remixed version of the track Suicidal adage. The EP was already being distributed by “Super D” (US) and was for sale in Cdbaby, Amazon and in Tower Records U.S.
During that year, in the UK and Brazil, Tripofagia (the main Trip Hop site) chooses the EP Suicidal Adage as one of the best three Trip Hop EPs in 2004. In 2005, the company Jun Group Entertainment, Inc. chooses Lendi Vexer to become part of the soundtrack of the “Episode 10” of the American TV show called “The scene”. The selected tracks were Nothing was special, Every Thing is Special Tom Bollinger MIX, Suicidal adage and Tribute to desolation. By the end of that year, the Trip Hop compilation W.E.B (Wicked Electronic Beats vol.1) is edited in the UK and Brazil by Tripofagia’s team. This selection of artists includes Lendi Vexer with its song Tribute to desolation. About this, Guto (Tripofagia) wrote "Tribute to Desolation is one of the nicest melancholic trip-hop songs I've ever heard...". This record also included, among other artists, U-topia and Lovage (Mike Patton, from Faith no more and Dan The Automator, Gorillaz’s producer). By early 2006, due to the fast impact of the record on the web, the Colombian artist Paddington Breaks contacted Lendi Vexer. He made the second remixed version of the song Nothing was special. Meanwhile, in Argentina, the EP was sold in the live shows that took place in “Niceto Club”, “Cemento”, “Especial”, “Remember Jazz Pub” and “El Argentino”, among others for soon continuing in Auditorio Cendas, Virasoro Bar and Liberarte.

In 2007 they release, with its own label, the album The process of disillusion that consists of 13 tracks which explore the vocal variables inside the electronic music downtempo, conjugating sad and melancholic poetries with a strong critical content. It approaches musical genres as folk, song, broken beats, trip hop and a dismantled jazz reminiscent of the sound of the old school of Bristol, such as Portishead, Tricky, Massive Attack or PJ Harvey. The Theremin participates in this combination in several tracks of the record.
The album is distributed by SuperD, one of the greatest integral music distributors in the US which works through catalogue sales and has distributed this record in more than 2400 stores between the US and other countries (France, Italy, Canada, Japan, Korea, etc.). The record is sold in digital form in addition to iTunes, napster and eMusic and it is also available in music stores in Buenos Aires, in all Argentina and the rest of the world (through Faro Latino).

Two impelled artists to spill out deep songs about having decided feelings and aspects of life, with intense lyrics, sometimes introspective, full of personal queries; or, present and retrospective with critics worthy to be written with the most rational pen of the Punk.

Based on the Down tempo and the Trip hop in format “song”, with a dense and orquestal tint, minimal and rough at moments, distanced clearly of the soft skin of chill-out. The dirt and roughness of their sound is invoked with their old school equipment that they have gone on harvesting minutely from their beginnings.
This environment acoustic is seconded by the electronics and reinforced with the different abilities in both components, as the orchestrations and programmings of DG and the singular voice of Natalie and their ability with the legendary Theremin among other instruments.