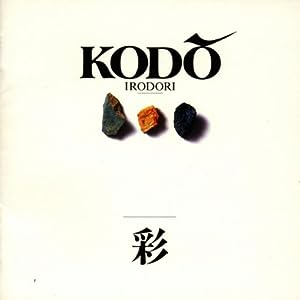 Kodo is a Japanese group that has become an international phenomenon, based on the island of Sado, that has taken the world by storm with their new stylings on semi-traditional taiko drumming. Founded in 1981, the group's name has dual meaning; according to the group, it translates both to "heartbeat -- the primal source of all rhythm," and "children of the drum, a reflection of Kodo's desire to play their drums simply, with the heart of a child." The group spends one-third of an average year touring in Japan, one-third touring the rest of the world, and one-third in rigorous workouts in their village on Sado. They have toured in all continents except Antarctica in their attempts to spread world peace via the messenger of music. Among their projects, aside from straightforward taiko performances, are a collaboration with new age synthesizer genius Isao Tomita for Nasca Fantasy, instructing the über-eclectic Cirque du Soleil in taiko for their own performances, the soundtrack for The Hunted, and a yearly "Earth Celebration" festival on Sado for percussionists from around the world to attend. They are ambassadors of peace through music and the current top bearers of the living art form of taiko drumming.