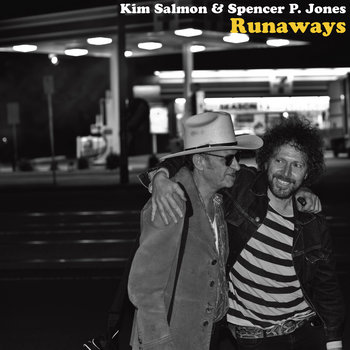 When Kim Salmon and Spencer P Jones got together to play some gigs as a single entity in early 2012 there was an expectation of chaos – here were two musos with the swagger and baggage of a lifetime in rock n roll. During a month-long residency at The Old Bar in Melbourne, they developed a number of new songs and a divergent collection of covers from Kanye West to Peggy Lee to Jeffery Lee Pierce. Revealing monologues and rants were added to old blues songs and standards and new songs were deconstructed rather than rendered. Working with engineer Adrian Akkerman of Incubator Recording Studio, Salmon and Jones coaxed 12 songs for the album ‘Runaways’. The first single is a Salmon/Jones collaboration called ‘A Bitter Projection’ b/w ‘Monkey’ featuring saxophonist Ross Beaton (Eagle & The Worm). ‘Runaways’ is the first and possibly only album to ever be made by Kim Salmon and Spencer P Jones. Source