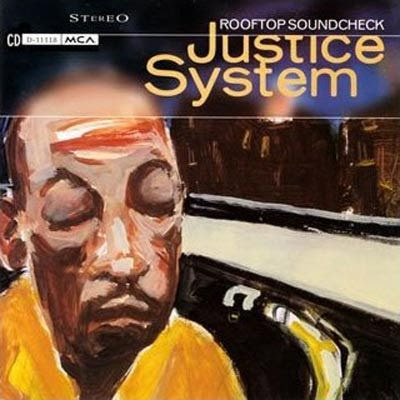 As one of the few "hip hop bands" on the scene when they emerged in the early 1990s, Bronx outfit Justice System was often compared to the Roots, a likening that probably worked against them as much as it worked in their favor. While their tight jam arrangements and juxtaposition of poetic rap with full-bodied band orchestrations was certainly reminiscent of their Illadeph contemporaries' approach, Justice System had their own sound and were musical innovators in their own right. Their 1994 MCA debut "Rooftop Soundcheck" captures a young, visionary collective with a focused sound, smart production, and top-notch batch of material.

On "Rooftop Soundcheck," Justice System's sound is equal parts jazzy and funky. The easygoing grooves and instrumentation would certainly garner comparisons to the original Roots crew, but "Rooftop Soundcheck" bears a much more full-bodied and choreographed sound than "Do You Want More?!!!??!" Driven by the sturdily flowing basslines of Coz Boogie and Eric G's energetic percussion, the music is smooth yet lively, marked by a crisp studio polish. I've heard some criticize this record as overproduced, but I find the group's balanced sound to be a strength—each of the instruments and sound elements is clearly distinguishable and comprises a tight, fluid sound. Guitarist Wizard C-Roc laces the songs with his rich funk licks, and the invaluable Mo' Betta Al holds it down on both the tenor sax and Rhodes piano, often on single songs. Individually Justice System is composed of some immensely talented instrumentalists, but together their results are truly extraordinary, bearing a tight and seamless quality rarely found in such hard-jamming bands, and their extended instrumental breaks and interludes provide countless highlights throughout "Rooftop Soundcheck." The LP thrives on its live sound and heavy-swinging arrangements, and the group proves its versatility by exploring a wide range of tempos, moods, and outside contributors—the sly, contagiously upbeat "Just Because" is based upon a killer muted trumpet part, while the deliciously moody "Soulstyle" plays like a rolling thunderstorm with its sparse bass and percussion and snaky sax echoes.

The punchy, abrasive Folex and the smooth, cerebral Jahbaz make for ideal complements, trading literate, abstract rhymes ripe with the vernaculars of New York's historic neighborhoods and hazy jazz clubs. With thick accents, vivid descriptions of such borough staples as the Hudson and Bronx Rivers, and wistful shouts to old favorites Coltrane, Gillespie, Thelonius, Bambaataa, Simon and Garfunkel, Flash and Caz, and Red Alert, they form a bright yet distant mood for the album, brilliantly creative yet somehow reverent of a far off time and realm. Sporting the chemistry of Phife and Tip and the stylistic vision of Camp Lo's Geechie Suede and Sonny Cheeba, Folex and Jahbaz celebrate the sheer power of live music and their abilities to rock any crowd, all the while boasting artistic spirit that makes it easy to envision them as scat artists or poets had they been born in decades past. "Rooftop Soundcheck" was digitally reissued as "Sounds of the Rooftop," which might be an even more apt title—the warm, mellow vibes make this an optimal listen for a summer evening, and the record oozes with the sounds of a busy, culturally rich city that might best be absorbed on a clear night from a towering rooftop.

The driving "Due Our Time" and "Trouble On My Mind" are the openers, immediately swallowing the listener with Eric G's expansive rhythms and the band's refreshing chord progressions as Jahbaz and Folex supply dizzying onslaughts of quotables with inspiring levels of conviction:

"Day after day I awake in the AM
Think of ways to survive, get my strength from a shaman
It's the same old, same old, the clock keeps tickin'
Got a few plans to get paid, but they never kick in
Damn another heartache, damn another heartbreak
So many people sleepin' while I'm just steady creepin'
Through the cracks and the holes tryin' to get some juice
Did a show or two so that I could get loose
With the band behind me, cold rock a party
C plays the line, girls shake their body
I can see it, I can see it, pray so this'll be it
Hopin', wishin', thinkin', so see it"

After the twangy "Flexin' tha Ill Funk" and exuberant "Dedication to Bambaataa" comes the single "Summer in the City," a warm weather anthem colorfully portraying a hot July Saturday giving way to a mild midsummer's evening, moving from the park to the basketball court to the street and back to a house party:

"Put your Timberland boots back under your bed
And buy yourself some Nike Wait-a-Minutes instead
So we can play ball for a little fun
I'll rock the sport full court or even just twenty-one
The playground is the place for mad kids to gather 'round
Freaks, I mean queens, on the side lookin' rather phat
So give me that booty back and take my beeper number
So we can swing the whole damn summer"

While the block party vibe of the original is more immediately irresistible, I actually prefer the subsequent "Sunshine Blend," a sparser arrangement buoyed by a staticky drum loop with laidback pipes and trumpet. "The Ill River Expedition" is less sunny but equally visual, allowing shine for both the MCs and the band with an extended instrumental outro. The tempo kicks up on the playful "Justice Funkin'," the rich, snarling jazz of "Take It to the Stage," and "Just Because," a lighthearted player's avowal:

"I did not hear her call me, I had the headphones on me
Sippin' on some coffee listenin' to some Sade
Ten AM on the dot, coolin' at my favorite spot
All my problems are forgotten as I'm shakin' to the sound
On the ground I dropped my Discman, damn, what a switch, man
She looked at me and this man froze in his toes
She said, 'Ayo Jahbaz, man, you're the one that has that
Summer in the City, yes, I've seen the video'
I said, 'Now hold up, wait a minute
A video a minute and I do want to get with it
'Cause your body is bodacious, my schedule's kind of spacious
I'll put you in between my Vibe and Source interviews'
But then my beeper blows up, damn, I gotta close up
Shop, I'm dedicated to my hip hop
Not frontin' I'm flossin', from Broadway to Shaw, son
My name is John Dawson and I got to move on, so kick it"

The aforementioned "Soulstyle" may be the record's highlight, a delightful groove that's as eerie as it is exhilaratingly smooth. Jahbaz shines rapping softly in double time:

"Versatility in verse, or is it straight originality
I quote a black poet 'cause he stocked up on reality
Justice System terrorist, the people wanna get with this
B-boy fashion, vocal vibe mentality
In my neighborhood the word is that Jahbaz be gettin' props
Praise and accolades because the skills I have are tops
Like a stallion, sportin' my medallion
Justice System funkin' like a stack of rotten scallions
I wear the funk like a fashion plate
So you can recognize the program from state to state
You can by the whole album but just like the dils-nick
Please don't bite the style, now chill kid, chill kid"

Despite a fiercely loyal club following, Justice System struggled to find airplay and was quickly dropped by MCA, relegated to the indies for subsequent efforts. With just a few reissues since its 1994 release, "Rooftop Soundcheck" remains a criminally overlooked record years ahead of its time; an expansive, stylish exhibition in superb songwriting and spectacular playing with hardly a second of skip material. Listeners still sleeping should graciously accept a late pass and prepare to lose themselves in the sounds of the rooftop.

by Pete T. for  www.RapReviews.com