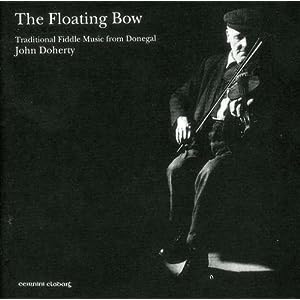 John Doherty was born in Ardara, County Donegal. He was born in 1900 and came from a famous clan of Irish Travellers who worked as a tinsmiths and horse traders. His birth certificate was uncovered in recent years, firstly by Professor Alun Evans, and subsequently by researcher Caomhin MacAoidh, allowing confirmation that his date of birth was 1900, rather than 1895, which has been recorded in error in several publications. His father Mickey 'Mor' Doherty was a fiddler as were a number of his brothers and sisters. Mickey Mor married Mary McConnell, a singer (whose brothers Alec and Mickey were well-known musicians in south Donegal). Together they had nine children and John was the youngest. In an interview in the 1970s he said that he had to practice in the barn as a teenager, and was not allowed to play fiddle in the company of his parents until he had mastered "Bonny Kate". He heard recordings of James Scott Skinner and imitated his style. His brother, also called Mickey, tended to play more in the style of Michael Coleman. Mickey was also recorded, notably on the album "The Gravel Walks".

From the late 40s to the 1970s he was sought out by collectors. "The Floating Bow" contains recordings made between 1968 and 1974 by Professor Evans in the town-land of Glenconwell. This collection arguably comprises the most extensive collection of his music, and was made when some argue Doherty was at his peak as a musician. He played with much ornamentation, including bowed and slurred triplets, rolls, 'cuts', mordents (particularly on long 'first-finger' notes), double-stopping (based on standard western music principles, normally highlighting the tonic and third of a particular chord). Heavily influenced by the uillean piping tradition, he often replicated the sound of the pipes' drones, by either retuning the fiddle to an open tuning ('scordatura'), or by maintaining the fourth finger on the string below the pitch of the melody. According to Alex Monaghan in the magazine, "The Living Tradition", he was a significant influence on the fiddle playing of The Chieftains and Altan. Doherty was also a stoty-teller, and some of his tales appear on the liner notes to "The Floating Bow".

Doherty sometimes did not carry a fiddle with him on his travels because he knew that, if needed, he was always likely to be provided with one when he visited "house dances" (folk music parties hosted by a family in their own house). "The Floating Bow" was played on a borrowed fiddle (owned by Professor Evans). He once travelled to Dublin to play in the Oireachtas Championships. He was first recorded in 1945 by The Irish Folklore Commission during one of his trips to Teelin in Southwest Donegal and later by the BBC (Peter Kennedy) in Belfast in 1953. 10 of these 1953 recordings were issued on "Traditional Dance Music of Ireland" (various artists). Kennedy's recordings were later issued in three volumes on the Folktrax label, the first of which was "Pedlar's Pack" (1964). These recordings are available from Topic Records who now own the copyright. Paddy Glackin first met him in 1965, and was heavily influenced by John. He could probably described as the last of the travelling fiddlers. He died in Ballyshannon Rock Hospital, County Donegal.


Tracklist :
1. The Spirits of Wine and Madame Bonaparte (Reels)
2. The Further in the Deeper (March)
3. An Cháilfhionn and The Flogging Reel (March and Reel)
4. Drops of Brandy (Slip Jig)
5. Miss Patterson's Slipper (Reel)
6. The Day I Listed and The Fantastic Reel (Air and Reel)
7. Willie McLennan's (March)
8. The Lancers Jig and Gusty's Frolics (Double Jig and Slip Jig)
9. Tom Tailor's (Highland)
10. Scots Mary (Reel)
11. The Sligo Maid's Lament and Hand me Down the Tacke (Reels)
12. The Eniskillen Dragoons, Nóra Críonna and Píobaire an Chéideadh (March, Jig and Reel)
13. The Cameronian (Reel)
14. Dúlaman na Binne Buí (Highland)
15. Within a Mile of Dublin and Old Simon's Hornpipe (Reel and Hornpipe)
16. The Glenconwell Hornpipe (Hornpipe)
17. The Mint in the Corn (Reel)
18. The Highlanders and The Wind that Shakes the Barley (March and Reel)
19. Seán sa Cheo (Reel)
20. King George IV (Strathspey)
21. The Lancers Jig and The Silver Slipper (Double Jig and Slip Jig)
22. The Mountain Road (Reel)
23. The Braes of Maas (Highland)
24. Bonnie Kate (Reel)
25. Maidin Fhómhair and Miss McLeod (Air and Reel)