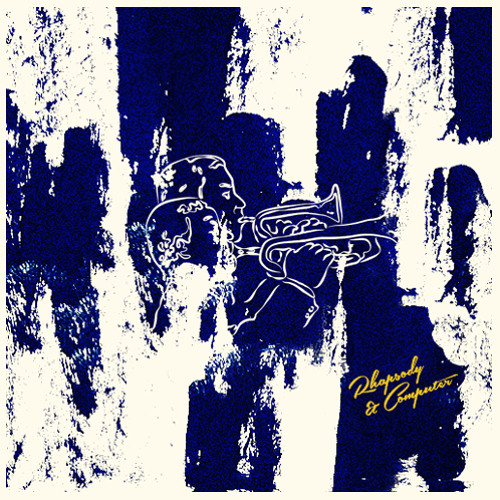 Rhapsody & Computer E.P. is the second release of that french duet. After Mad in November 2012, that project starts an age of collaborations for the Jezz.
The first track, Rhapsody & Computer is a kind of Downtempo with Classical influences melt up with electronic sounds. In second comes California Widow, wich is the succesfull realisation of a collective work between the Jezz At Home, the jazz pianist PAC and the producer/singer Luky U. The result of that collaboration is a slow, deep track, between Dub and Jazz. The third composition, You Drive Me Crazy, was the perfect occasion to invite the guitar player Grand Daddy Double Woo to play his rock sound on the most lively song of the E.P.

The first remixer is Miekky Vij, a huge electronic music admirer, who deliver a deep sound, made of underground samples, analog synthesizers and percussions of all kinds, which results in a mix between electronic music, ambient, down tempo and abstract hip-hop. Pending his debut E.P., Miekki Vij made a stunning remix of California Widow.

Luky U is a photographer, movie maker and music producer. he used to be for several years the lead singer of the funk/rock band The Daffs. Due to a fad for Ableton Live, his style turned to a more abstactive direction. His debut album « From J to C » is an experimentation between rock, soul and abstract Hip-hop, released on the french label Apostat. His edit of California Widow brings a subtil touch of psychedelic rock and low tempo to the E.P.

The third remixer is One track Mind, a classical performance pianist who work on electronic fusion projects. With a combination of keyboards, saxophone and samples, OTM creates multi genre music that ranges from upbeat to easy listening. Her Rhapsody & Saxophone melt her control of the saxophone with a breakbeat rythme.

Faithfull to his musical conviction House/Techno, Horstmeier takes part in that project as a Swarm Prod founder member. The productor of Feel Good (released on 2013 on WellDone Music, label of Marlon Hoffstadt) sign here a remix full of subtetly and delicacy.

Who else than Georges Cauld, Radio host, graphic designer, event organizer, Dj, producer and active member of Swarm Prod to make the last remix, going on his serie of the Ugly Edit. Rhapsody & Computer doesn’t escape to the rule, and conclude the E.P. on a Detroit, Techno note.