Jerry Jones - Compared To What 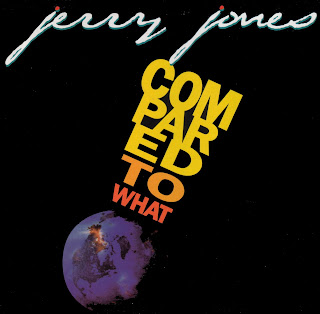 erry Jones at the Kingston Hotel is a rare 1971 Studio One release that documents the permeable boundary between American and Jamaican music in the late 1960's. The PK / Blood And Fire compilation Darker Than Blue: Soul from Jamdown (1973-1980) picks up the story slightly later, focusing on Jamaican versions of American funk songs and taking us up to the beginning of hip hop with the inclusion of Welton Irie's Hotter Reggae Music.

Jerry Jones at the Kingston Hotel reflects a slightly older connection between late 1960's Soul music and Jamaican Ska. However, the inclusion of such tracks like the classic Les McCann penned "Compared to What?" suggests the strength of the musical tributaries linking hip hop, jazz funk, soul and Jamaican music of all kinds.

Frustratingly, there is relatively little information out there about this gem of a record. While it has apparently never been re-released, some of the tracks have appeared on compilations like Studio One Soul (Soul Jazz) and Feel Like Jumping: The Best of Studio One Women (Rounder).

The best information I was able to find about the record appears in the liner notes of Feel Like Jumping (reposted here c/o niceup.com).

Jerry Jones was an American singer who had come to Jamaica to perform at a show produced by Alty East at the Regal Theater. Mr. Dodd was one of the audience members. Jerry originally hailed from Birmingham, Alabama and moved to Canton, Ohio where she performed at amateur talent shows. She started performing throughout Ohio, Pennsylvania, New York State and as far north as Toronto and Montreal, appearing with top Motown and soul stars. In the mid sixties she moved to Miami where one of her bookings brought her to Jamaica. After Mr. Dodd saw her at the Regal, he invited her to record for Studio One, releasing a number of singles and the Jerry Jones at the Hotel Kingston album. The Hotel Kingston was located on Half Way Tree Road across from the Jamaica Telephone Company and now houses some government offices. Mr. Dodd and Alty East produced a series of shows for Jerry that were held at the hotel and which led to the title of the album, but the songs were all recorded at the studio on Brentford Road. "Compared to What" (1970) was a cover of the Les McCann and Eddie Harris collaboration that was a hit off the 1969 Swiss Movement album done for Atlantic. Jerry Jones had other Studio One releases like "Still Waters" (1970) and "Honey Come Back" (1971) that were also quite popular when released.

Other than this plurb, there is relatively little information out there on this record or on Jerry Jones herself. She appears to have been a member of the Philly soul group Brenda and the Tabulations but other than that, it is hard to find any other information about Jerry Jones on the web. Any info about her and or this record would be greatly appreciated.