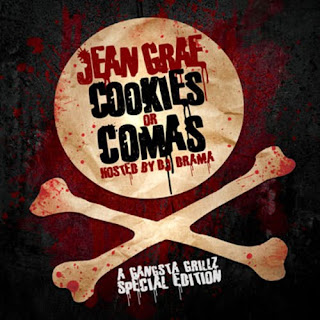 After going a few years without releasing a full-length project, Jean Grae returns with Cookies or Comas, a DJ Drama-helmed mixtape that reminds of her lyrical prowess…

Femme fatale Jean Grae has for years captivated audiences with her slick rhymes and New York-bred style. Now, the eccentric Blacksmith emcee has returned with her first project in three years, the Gangsta Grillz special Cookies Or Comas.

Anchored by DJ Drama, the tape finds the artist formerly known as What What? showing she hasn’t lost a step since 2008’s Jeanius, getting back to business on the halfway crook-bashing opener “Casebaskets,” where she spits, “Your clique is fools, fuckin’ with clowns and jigaboos/I’m sick of buffoons, fuck it; sick of thinking of goons.” Next, she teams up with Talib Kweli and Styles P over the throwback-era bassline of “RIP,” before gaining a retrospect for life on the poignant “Imagine.”

Often regarded as one of the best females to ever bless a microphone, Jean easily holds her own when riding with her lyrically dense male counterparts, like during the headbanger “Assassins” with Royce Da 5’9” and Pharoahe Monch, as well as on the hypnotic “Uh-Oh” with Kweli. While the mixtape lulls at times on cuts like “I Rock On” and “Jeanie Rules,” Cookies Or Comas is a satisfying appetizer to her main course, which we hope will be served sooner than later. —Meka Udoh