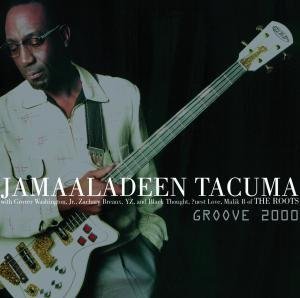 Few musicians leave their audiences with a feeling that they have truly witnessed something amazing. Artist/Producer/Performer/Arranger AND Bassist - JAMAALADEEN TACUMA does just that. This native Philadelphian has always stretched the old mold of what and how a bassist is supposed to play. Tacuma has simply re-defined his instruments artistic potential. In the mid 70’s, his creatively free approach to the bass caught the eye and ear of the legendary saxophonist Ornette Coleman. Tacuma became a member of Coleman's electric band, Prime Time; he toured with the group and played on some of Coleman's historic recordings such as: "Dancing In Your Head", "Body Meta", and "Of Human Feelings". As a soloist, Tacuma continued to press the musical envelope with his debut album in 1983 entitled simply, "Showstopper". Several records followed, some of which include: Renaissance Man (1984), Music World (1987) and JukeBox (1989), which confirmed his ability to flip between various musical genres. Even the critics have had high praise for Tacuma’s musicianship and artistry. In 1981, he received the highest number of votes ever for an electric bassist in the ‘Talent Deserving Wider Recognition" category of the Down Beat critics' poll. Tacuma has performed and recorded with musicians on nearly every continent. He has recently completed a powerful project with Turkish percussionist Burhan Ocal. The CD is entitled "GrooveAlla Turca" and it features traditional Turkish instrumentalists with American Jazz/Funk musicians. Furthermore, the release "Mirakles" by Derrick Bailey, G. Calvin Weston & Tacuma was cited as one of the "most important recordings of year 2000" by All Music Guide. He also recently completed a recording entitled "DUST" with BAUHAUS member Peter Murphy on the Metropolis label. Tacuma has collaborated with a diverse and talented roster of artist: poets Jayne Cortez, Quincy Troupe and Amiri Baraka and guitarists Jeff Beck and James Blood Ulmer. He has worked with orchestras led by Anthony Davis at Carnegie Hall, to recording and performing with rap group The Roots. He has recorded with saxophonist Wolfgang Puschnig and Grover Washington Jr., and recently collaborated with James Carter, in which Tacuma played and wrote material for the CD "Layin In The Cut". Tacuma is currently working with the great comedian and philanthropist Bill Cosby on several projects and has even written music for the hit TV show, "The Cosby Show". Staying true to his artistic and experimental approach to music, Tacuma is currently producing projects for his newly formed "Crash Pad Productions" so stay tuned.
permalink