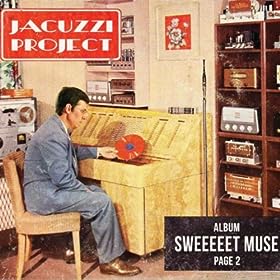 I'm torn, my dear friends, just like Natalie Imbruglia. My fragile blogger integrity is shaken to the core and is about to crack. Long story short - I cannot make myself neither like the new Jacuzzi Project release nor give it a low rating. So much for my self-proclaimed subjectivity, right? But subjectivity is one thing, fairness - another. And fairly speaking Jacuzzi Project is a fantastic collective and Sweeeeet Muse is a great exciting album. I mean, really. Their sound emanates so much energy that if you play Sweeeeet Muse long and loud enough it will probably make your kettle boil. They are obviously engaged in their music, love the shit out of what they're doing and know what end of a saxophone to blow into. I bet they kill live and maybe live stage is their true calling and natural habitat, because I feel like studio recording sucks a good portion of juice right out of their music. This is (to me) one of the bands that feed on the energy of the crowd, especially if the crowd "gets it". And maybe (and most likely) this is the main reason I personally could not enjoy the album as much. Plus, and yes, I feel my ears burning when I say that, this is "not trip-hop". Or it is as much as Red Snapper (which had a quite obvious influence on Jacuzzi Project's sound), with one significant, in my opinion, difference - while Red Snapper despise the term trip-hop and have discovered and built their sound from the ground up just to be lumped into trip-hop category (by the likes of yours truly), Jacuzzi Project walks the road (somewhat) traveled but tries very hard to appeal to both jazz crowd (hence all the solos and scats) and the trip-hop crowd (active involvement in Ru Trip Community and quite prominent electronic parts on certain tracks). Hey, whatever works, right? Except sometimes it doesn't. For me anyway. As much as I'd like to unwind and shake my bony structure to, say, rocket fueled "Love Factor", funky "Crocodiles" or double-barreled sax-drums machine-gun "Zhbanov Song", I'm pretty far from the band's native Ukraine, so I need something of more substance, with more finesse and less attitude, something that would actually sound great in my headphones. Like the beautifully intense "DTB" (feat. Lessie) - I'm not even sure if French rap was all that necessary there, but it surely doesn't do any harm, - or my favorite track on the release - "Privilege", where Massive Attack-esque rap and skillful sax create this vibrant jazz-meets-electronica atmosphere that I would have really liked to hear feel throughout the entire album. I think that if Jacuzzi Project would make a live album next or lock themselves in a studio for a few months and make a quieter, more sophisticated album, I would enjoy either one of those much more than Sweeeeet Muse. That said, I will let fairness win this time and give the album its earned 4 moons.