Jackie Mittoo - The Keyboard King at Studio One 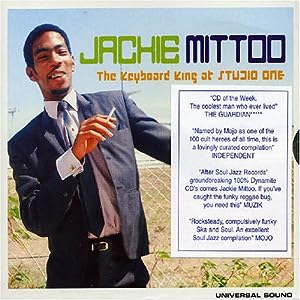 As Soul Jazz Records enter into the mighty vaults of Studio One , the most respected label in reggae history we present you with this showcase of Jackie Mittoo , one of the defining figureheads of reggae music, and his years at Studio One. From forming The Skatalites, at age 15, alongside Don Drummond, Roland Alphonso, Tommy McCook and others to his work as writer, arranger, producer at Studio One records during the sixties, writing and playing for artists such as Alton Ellis, Ken Boothe, Marcia Griffiths and The Heptones (to name a few), to his career as a solo artist as well as leader of bands such as The Soul Brothers, Soul Vendors and The Sound Dimension, Jackie Mittoo is at the heart of reggae music. He was one of the instigators of Ska music, Rocksteady and Reggae. In the seventies, DJ music and Dancehall were based upon classic rhythms of the sixties, many using the instrumental tracks that Jackie Mittoo created at Studio One at this time. This compilation features the work of Jackie Mittoo at Studio One. It features music recorded as a solo artist (as opposed to the numerous singers that he accompanied). Most of these are taken from his recordings in the mid sixties where he was recording on an almost daily basis at Studio One's Brentford Road studios developing the funky reggae sound that was his trademark. Soul Jazz Records are releasing this CD as the first of a series of Reggae artists to be covered following the success of the 100%Dynamite releases. Jackie Mittoo is as much an icon of Reggae as he is to fans of Funk music. He is without doubt the funkiest keyboard player ever to come out of Jamaica! This is the first volume of Jackie Mittoo' s music to be released on Soul Jazz Records. A second volume featuring his work for other producers in the seventies such as Bunny Lee and Sugar Minnot will be released later on in the year. "CD of the Week. The coolest man who ever lived" THE GUARDIAN***** "Named by MOJO as one of the 100 cult heroes of all time, this is a lovingly curated compilation" THE INDEPENDENT "After Soul Jazz Records' groundbreaking 100% Dynamite CD's comes Jackie Mittoo. If you've caught the funky reggae bug, you need this" MUZIK "Rocksteady, compulsively funky Ska and Soul. An excellent Soul Jazz compilation"