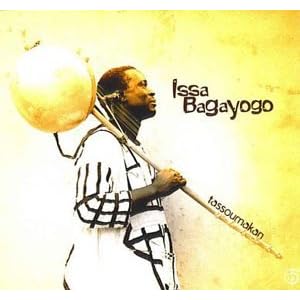 
By Rose Skelton   from http://www.bbc.co.uk

'The album is a stimulating and soothing journey into an incongruous collaboration...

"Take Dya" for example. The track opens with a flute call so vital that you can almost see the lips upon the instrument, followed by the kamele ngoni, the raw vibration of the strings conjuring up images of the calabash and skin instrument that hails from Issa's home of Mali. Then enters an array of synthesised beats and peeps so recognisable from the middle of the mainstream road that my irritation buds are tickled almost to distraction. With his voice, the flute (a highlight throughout the album) and his playing of the kamele ngoni so strong, one has to ask, why?

Well, why not? In music, there's no sin greater than boring music and this album, a whopping fourteen tracks, at least challenges the listener and presents music from rural Mali in a new and exciting, if not totally aesthetically pleasing to all ears, way. Issa Bagayogo comes from a farming family in southern Mali and discovered his love of the instruments that were available to him, namely the kamele ngoni. After two unsuccessful recordings in Bamako, Mali's capital, at the same time training as a bus driver, there followed a period of alcoholism and desertion by his wife (so the sleeve notes tell us). Issa became depressed. Then came producer Wernert and collaboration with a guitarist from Ali Farka Touré's band and the result was Afro-electric (personally, the name alone creates a shudder). However, it was a great success and after two albums, Issa won an award that recognised him as Mali's brightest new hope. Afro-electric had worked.

The album is a stimulating and soothing journey into an incongruous collaboration that at times works very well. In "Nderi", Mama Sissoko's guitar solo, consistently strong throughout the album, rises above Issa's poetry-like vocals, added to by an ethereal sound that might have leapt right off super-cool French band Air's Moon Safari. The final track comes as a wind-down, complete with wave sounds and lullaby-like female cooings. The only thingleft for the listener then is to decide whether or not Techno-Issa, as he is affectionately known by his fans at home, is your cup of tea.