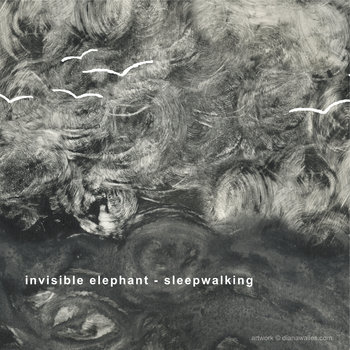 It's been a while since the the last album, longer than i was hoping for. i thought about recording this album but thinking was pretty much all I was getting up to until i got an email last year asking if i would be interested in submitting a song for a compilation.

that turned out to be the spark/motivation/kick up the arse (cheers euan!) i needed because after i recorded that one song i couldn't stop and the whole thing was done pretty quickly.

the first album (the lights go out) was an unexpected but interesting spooky creative trip, the second (anomie or swimming in a black sea) was the heartbreak album and this one is back the more spontaneous feel of the first. a 40 minute trip around what was happening in my brain around that time.

i did have a concept for the album once i'd inadvertently ended up starting it. i wanted to record something was an album length sleep cycle. around the time of the recording i was having a strange time sleeping. i'd eventually drift off (i think) but i wasn't sure if i'd gone to sleep or not. i'd hallucinate and see spiders dangling over the bed and ants crawling over me and then wake up, do my normal just-woken-up things and then wake up for real. if not spiders and ants it would be drowning, being dragged under the waves and unable to pull myself up. it wasn't actually sleepwalking as far as i can remember but it was a strange time and that all filtered through to make the record.

i wanted the record to start with clarity (i'm awake) then slowly drift off into a peaceful sleep before disturbance and nightmare visions in the middle and then wake up again refreshed at the end (two moons).

one area of continuity is the haruki murakami references. people have emailed and mentioned them before and there are two songs in particular which are probably obvious to anyone who is interested by the titles. the other consistent thing is the environmental recording of children playing the same recording has been used in all of the albums.

as may be apparent, i've decided to be a bit more open an communicative starting with this album (there are also notes on the individual tracks if you click on them). i don't want to share too much but i realise from things i like and also from some emails i've had that some people are interested in knowing more and that it can add something to the music if there's a bit of context so although it's against my nature i'l do my best from here on in.

one final thing i should address is the thanks on the cassette sleeve. i forgot angie without whom none of this would have happened. i know i haven't exactly changed the world but releasing these records has been important to me and without angie's initial encouragement and help i never would have done more than the lights go out and no more than about 5 people would have heard my music so a huge thank you and apology.